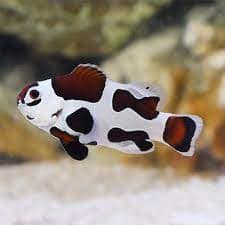 The ORA® Captive-Bred Mocha Storm Clownfish is a distinctive designer clownfish, which has its origins in the mutation that was discovered in the process of selective breeding. The Captive-Bred ORA Mocha Ocellaris Clownfish has an exaggerated white body design with a nearly white face, with eyes of black. The random patterning of blotchy blotches on the Captive-Bred ORA Mocha storm Ocellaris Clownfish has a gorgeous orange-brown coloration that evokes freshly-brewed coffee or sun tea that is stunningly accented by the milk-white coloring.

This ORA Mocha Storm Ocellaris Clownfish thrives best placed in an aquarium that is at minimum 20 gallons or more that has plenty of live rock. It is possible to create a symbiotic relationship between the following anemone species: Carpet (Stichodactyla S. sp. ), Sebae (Heteractis crispa), Bulb (Entacmaea quadricolor), or Ritteri (Heteractis magnifica) Anemones. Although they are not required to have an anemone for its survival if you decide to keep an anemone in your aquarium, make sure the lighting system and aquarium is able to accommodate the needs of your host anemone prior to adding one to the aquarium.

Captive-Bred Clownfish such as those of the ORA Mocha Storm Ocellaris Clownfish are superior to wild-harvested species. One reason is that Captive-Bred Clownfish are very robust and familiar with the conditions of home aquariums. This is why this ORA Mocha Storm Ocellaris Clownfish is an excellent option for both novices and experienced aquarists too. It is able to be kept alongside many other species of captive-bred clownfish in the event that they are introduced to the aquarium simultaneously.

This ORA Mocha Storm Ocellaris Clownfish, along with many other species of captive-bred clownfish, could be raised in the home aquarium with ease and is among the most popular “starter” fish that are suitable for breeders in saltwater. Females are the bigger of the two and the two fish usually remain near each other within the tank.

The ORA Mocha Storm Ocellaris Clownfish is an egg-laying species and usually deposits its eggs on a surface close to the bottom of an anemone host. It will also defend the eggs from tankmates. The eggs are usually born in between 6 and 11 days, based on the temp. The fry need to be raised in a separate tank with a diet consisting of Rotifers, and then the baby brine shrimp.

This captive bred ORA clownfish requires meaty and non-meaty food along with some greens to supplement their diet. A premium marine flake food that is rich in spirulina algae, freeze dried and frozen foods