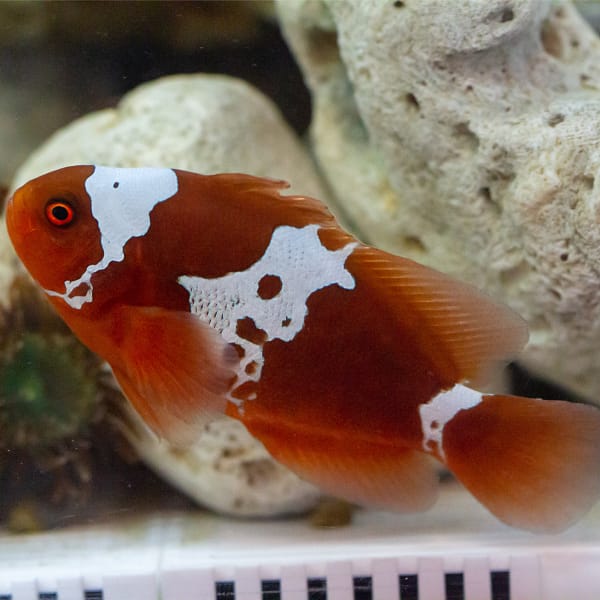 Maroon Clownfish (Premnas biaculeatus) are famous for their vivid colors and large fins as well as for their positive attitude. It is possible to expect the adult size ORA® Captive-Bred GoldxLightning Maroon Clownfish to be a sight to see that will make a striking display in any aquarium of marine life. If you are seeking to pair these designer clownfish, it’s usually recommended to choose fish that show an impressive difference in size.

Like all Captive-Bred Clownfish, the Captive-Bred Gold and Lightning Maroon clownfish are resilient fish, accustomed to the conditions in home aquariums. This makes them ideal additions for aquarists who are novices and experienced alike. The Captive-Bred clownfish are excellent options for reef aquariums. In general, Maroon clownfish have the highest territoriality of the species of clownfish that exhibit aggressive and semi-aggressive behaviour. Remember this fact: Maroon Clownfish are very sensitive to copper levels that are elevated and should not have exposure to copper levels that are close to or exceeding 0.15ppm.

Captive-Bred Clownfish can be easily bred in the aquarium of your home. Females are the most massive of the two. The two species generally stay close to each to each other in the aquarium. Captive-Bred Clownfish are egg-laying fish that lay eggs on flat surfaces and guard the eggs against tank mates. The eggs are usually born within 6 to 11 days, based on the temperature of the water. The fry should be kept in a separate tank with a diet consisting of rotifers, followed by baby brine shrimp.

Do not drag your clownfish with a net because its cheek spines could get caught. Utilize a sample container to capture if needed.