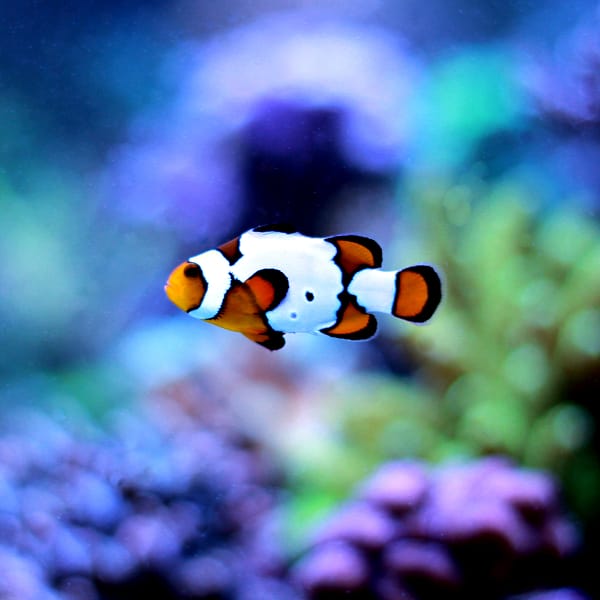 The captive-bred fish have an unique advantages over the wild caught species since they’re typically robust and are more comfortable with the conditions of the aquarium at home. Thus, captive-bred fishes are the perfect choice for newbies and experienced aquarists alike.

The ORA Picasso Percula Clownfish is simple to breed in your home aquarium. Females are the biggest of the two and the two fish are likely to remain close within the aquarium. Clownfish lay eggs on flat surfaces and guard the eggs against other tankmates. The eggs are usually born between 8 and 11 days, depending on the temperature of the water. The fry should be raised in separate tanks eating rotifers and then baby brine shrimp.

Its diet is made up of virtually any meaty products and herbivore-based preparations.

The Picasso variety is naturally found throughout the Solomon Islands and Papua New Guinea However, it is extremely rare. ORA’s breed of Picassos was born in 2004 from one natural male in the Solomon Islands, which was bred with a standard Onyx female. Over the years, we’ve added more wild Picassos to the breeding program. These stunning fish display an extra white stripe, mostly in the center of their stripe. Every fish is distinctive and is carefully selected by our expert graders. They grade these fish based on how much white is present and the peculiarity of the stripes and the uniqueness of markings. This Picasso Clownfish may be radically mark-free on one side but just have an extra bit with white markings on the opposite.