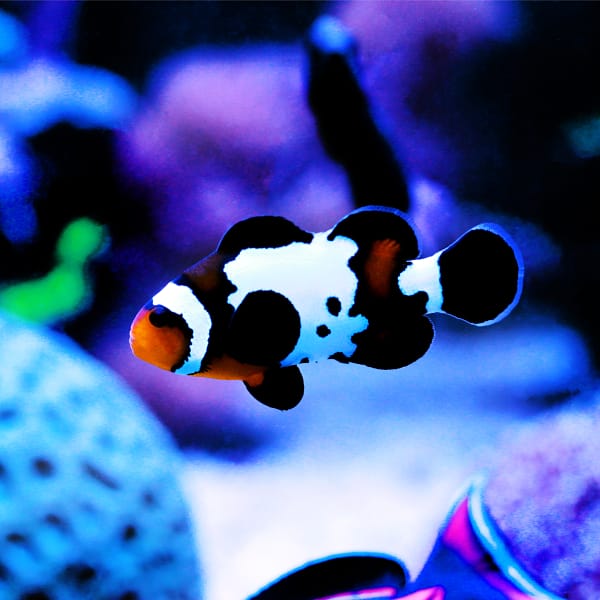 It should be noted that, like the Black Ocellaris, the ORA Black Snowflake Clownfish spends the first year of its life gradually darkening to its final black coloration and some individuals ultimately retain traces of orange on their faces.

The ORA Black Snowflake Clownfish is an excellent choice for almost any saltwater aquarium hobbyist as captive-bred fish have unique advantages over wild-harvested species. Captive-bred fish are very hardy and more accustomed to conditions found in home aquariums.

The ORA Black Snowflake Clownfish is easy to breed in the home aquarium. The females will be the larger of the pair and the two fish will usually stay close to each other in the aquarium. Clownfish are egg layers and will deposit the eggs on a flat surface and defend them from other tank mates. The eggs will normally hatch in 8-11 days depending on the water temperature. The fry must be reared in a separate aquarium on a diet of rotifers followed by baby brine shrimp.

The diet of the ORA Black Snowflake Clownfish consists of almost any meaty fish food items and herbivore preparations.

The Black Snowflake has a considerable number of white marks that are irregular which are accentuated by a dark body. In its juvenile stage, the Black Snowflake has an orange face, however, its face will slowly darken as it grows. Every Black Snowflake clownfish is different and some might have some traces of orange on their faces. Its edges are usually sharp. This Black Snowflake was created by ORA by crossing their Black Ice Snowflakes with the lineage that was created by Black Ocellaris over multiple generations. Each Snowflake is examined by a certified grader to determine the amount of white and the quality of the unique patterning. Like their name suggests they are unique.