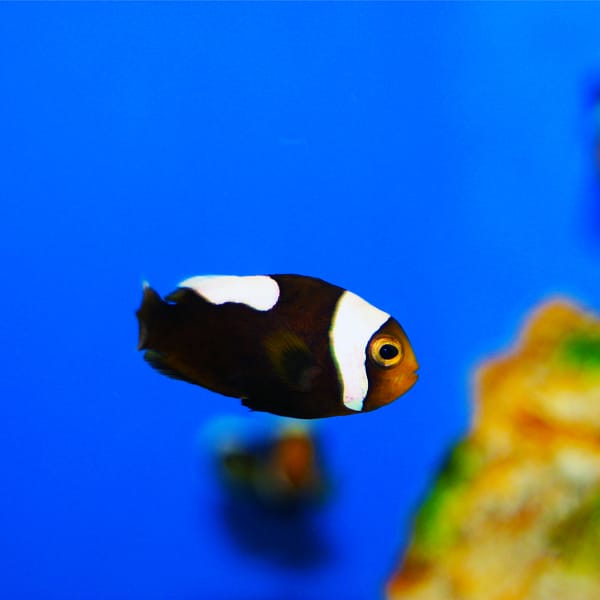 The ORA® Captive-Bred Saddleback Clownfish often referred to as the Saddleback Clownfish, as a juvenile, displays an orange-brown coloring with a wide white stripe running from their foreheads to chest with white spots which encircle the rear of the fish and appears like a distinctive saddle. As the fish grows older they become darker, close to black.

Captive-bred fish possess a distinct advantage over the wild caught species because they’re generally robust and are more comfortable with conditions that are typical of the aquarium in the home. Thus, captive-bred fishes are the perfect choice for newbies and experienced aquarists alike.

Breeding this fish is more difficult than other species of clownfish in a home aquarium, it can be done by a committed marine aquarist. Females are the largest of the two and the two species will generally stay close to each and in the tank. Clownfish lay eggs and lay them on flat surfaces and guard the eggs against tank mates. The eggs usually hatch between 8 and 11 days, depending on the temperature of the water. The fry need to be raised in a separate tank with a diet consisting of Rotifers, followed by baby brine shrimp.

The Saddleback Clownfish Amphiprion polymnus possess a very distinct appearance. There are several shades of color based on the area they are found in and the anemone that they inhabit. They may be yellowish-orange or black, or even mild brown, with a tailfin that is edged with white. The nose, as well as pectoral fins, also differ and could be either white, orange, or brown. However, all variations feature the wide white headband and a broad white middle band, which appears as if it’s forming the shape of a “saddle”.

In the wild, these clownfish depend on their anemone host and remain close to it. They’re typically located on their host anemone, the Haddon’s Carpet, or Saddle Stichodactyla Haddoni, but sometimes they are found with the Sebae Anemone Heteractis crispa as well as on very rare occasions, an Anemone Macrodactyla Long Tentacle doreensis. They don’t move to anemones from other species to establish new families but remain in their homes throughout their life unless the anemone is killed. It’s one of the very few species where the adult pair permit several adult pairs and subadults to be part of a huge anemone. Indeed, one diver recorded 30 clowns living in an enormous anemone.