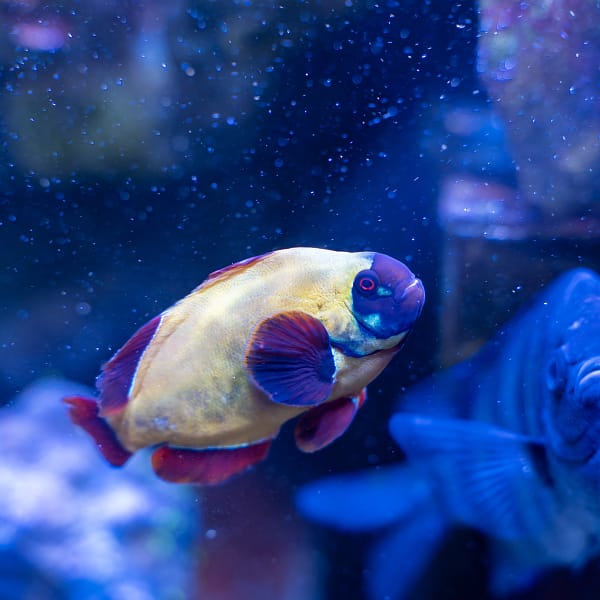 The Captive-Bred Gold Nugget Maroon Clownfish is ORA®’s most distinctive clownfish species to present. Its distinctive appearance is caused by genetic mutations that manifest in a manner similar to the mutation that created the Platinum Percula. But, this Premnas designer changes when it matures, and the body’s color changes from white to sparkling gold. The Fins of the Gold Nugget are dark maroon in color and accented with fluorescent orange trim. The eyes of the designer clownfish are dark and striking in contrast to the body of gold. Some fish exhibit an iridescence of icy blue along the edges of their bodies. Caution must be taken when pairing, choosing tankmates, or choosing tank size.

Captive-bred clownfish are simple to breed in the aquarium of your own home. Females are the largest of the pair and the two fish usually stay close within the aquarium. They are egg-laying fish and deposit their eggs on flat surfaces, and protect the eggs from the tankmates. The eggs usually hatch within 8 to 11 days, based upon the temperatures. The fry should be kept in a separate tank with a diet consisting of Rotifers and then baby brine shrimp.

Do not drag your Maroon Clownfish with a net since its cheek spines may get caught. Consider using a specimen tank to capture the fish if it is required.

In its early stages as a child, the Gold Nugget is white and is not displaying the gold-colored coloration. Once it grows older, the Gold Nugget Maroon matures, its body color will change between white and yellow gold. Gold Nuggets are a dark maroon shade with sharp orange edges. The Gold Nugget’s fins are maroon and exhibit this throughout their characteristics.