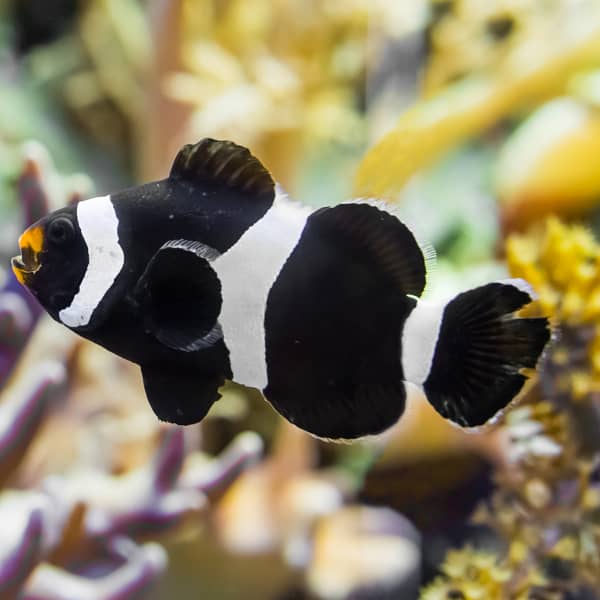 ORA® Captive-Bred Black Saddleback Clownfish often called the Saddleback Clownfish, is mostly black, with a yellow-face and striking yellow-outlined pectoral fins. The central stripe of this variation spans the entire length of the body, which is different from other variations of the species.

A 30 gallon or bigger aquarium is recommended. It can be kept in small groups, and benefit from a host anemone. They can develop relationships with some of the species listed below: Carpet (Stichodactyla sp. ), Sebae (Heteractis crispa) or Ritteri (Heteractis magnifica). (Always ensure that your lighting system can meet the needs of your host anemone prior to incorporating it into your aquarium.) It gets more aggressive with species that it is not familiar with as it gets older.

The captive-bred fish have a unique benefit over species that are harvested wild because they’re generally robust and are more comfortable with conditions that are typical of the aquarium at home. So, captive-bred fishes are an excellent choice for beginners as well as experienced aquarists.

The Captive-Bred Black Saddleback is a slightly difficult species to breed and spawn than the other species of clownfish in the home aquarium, it can be done by the committed marine aquarist. Females are the largest of the two. The two species typically stay close to one another in the tank. Clownfish lay eggs on flat surfaces and protect the eggs against other tankmates. The eggs usually hatch between 8 and 11 days, depending on the temperature of the water. The fry should be reared in separate aquariums with a diet consisting of Rotifers, followed by baby brine shrimp.

The Black Saddleback Clownfish diet consists of nearly all meaty items of food and herbivore recipes.

The Black Saddleback is not just a black-colored version of the brown Saddleback (A. polymnus) we sell It is an entirely different morph. The real Black Saddleback differs from the regular brown variant in that it has a complete middle bar, not its distinctive saddle. Some of them also have an additional bar prior to the tail too.

They sport the same distinctive “bobbing upwards and downwards” swimming motion that is seen in the normal Saddlebacks.