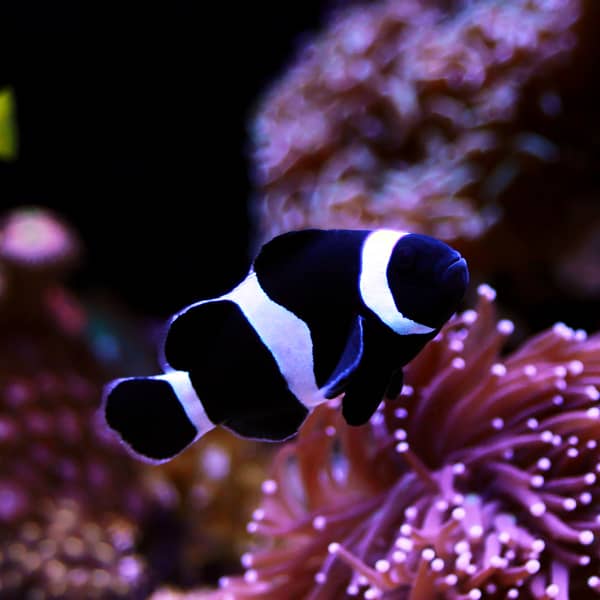 This ORA® Captive-Bred Misbar Black & White Ocellaris Clownfish can be encountered in association with anemones in reefs that lie in the Coral Sea. It is often found in groups or, more frequently in smaller groups within a species of anemones, such as Heteractis magnifica, or Stichodactyla Mertensii. Beautiful black Ocellaris generally have an unfinished tail stripe or center or tail stripe, and sometimes they possess a missing head bar. The captive-bred clownfish can grow to the maximum of 3 inches in an aquarium. They can be kept in groups.

ORA® Captive-Bred Misbar Black & White Ocellaris Clownfish is distinct due to its jet-black body, and the combination of white stripes on both sides. When they are juveniles, these clownfish begin with amber or orange coloration and as they age, they’ll gradually darken until they reach their adult coloring. They are extremely hardy and ideal for novices or experienced aquarists.

This Misbar Black and White Ocellaris Clownfish is an ideal choice for an aquarium with a reef. If brought into the aquarium in the same way, various kinds of clowns are able to be kept together within the tank.

Captive-Bred clownfish can be easily bred in your home aquarium. Females are usually the largest of the two and two fish generally stay close to each their aquarium. They are egg-laying fish and lay eggs on a flat surface and protect eggs from the tankmates. The eggs usually hatch between 6 and 11 days, based on the temp. The fry need to be raised in separate tanks with a diet consisting of baby brine shrimp and rotifers.

Captive-Bred clownfish require meaty foods along with some greens as part of their diet. A premium marine flake food that is high in spirulina, along with frozen and freeze dried foods is a common choice for these aquarium fish.

These stunning Black Ocellaris usually possess an insufficient center stripe or tail stripe and sometimes they might have a head bar that is not complete.

Their distinctive patterns make them easily identifiable and attractive. They are not caused by selective breeding. They result from developmental flaws in stripe patterns that occur in the stage of larvae. Nearly every one of the spawns of A. Ocellaris will result in misbarred young however, they can be unpredictable and each has an individual pattern that creates one of a kind species.