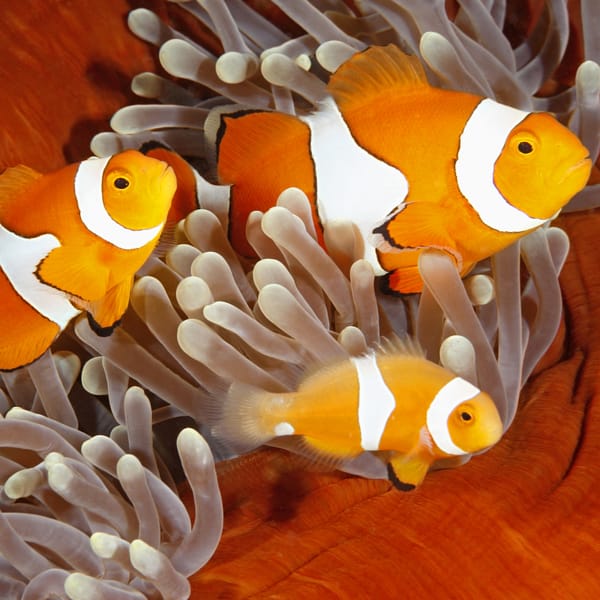 The ORA® Captive-Bred Misbar Percula Clownfish can be found lacking their caudal stripe, or a center stripe is not complete and could have a missing head stripe. Misbar Percula Clownfish occur naturally and are located in conjunction with anemones that inhabit the coral reefs that are found in Oceania as well as the Indo-Pacific along with on the Great Barrier Reef. They can be seen in groups or more frequently in small groups or in pairs within an Anemone. Captive-Bred Misbar-Percula Clownfish typically are predominantly white and orange in their early years. As the fish grows older, the black areas between white stripes get darker with age.

Captive-bred clownfish are simple to breed in your home aquarium. Females are usually the biggest of the two, and the two fish are likely to remain close to one another within the aquarium. These fish are egg-layers and lay eggs on a flat surface and protect eggs from tankmates. The eggs usually hatch within 6 to 11 days, depending on the temp. The fry need to be raised in a separate tank with a diet consisting of baby brine shrimp and rotifers.

In the aquarium, it will readily eat all meaty and herbivore-based preparations.

Be aware that The Captive-Bred ORA Misbar Percula Clowns are completely white and orange. As they mature they will turn dark black in between their white stripes.

The Perculas usually lack their caudal stripe or have an unfinished center stripe. Sometimes, they might have a head bar that isn’t complete. The dark pigmentation begins to appear at the mid-section of their body as they age.