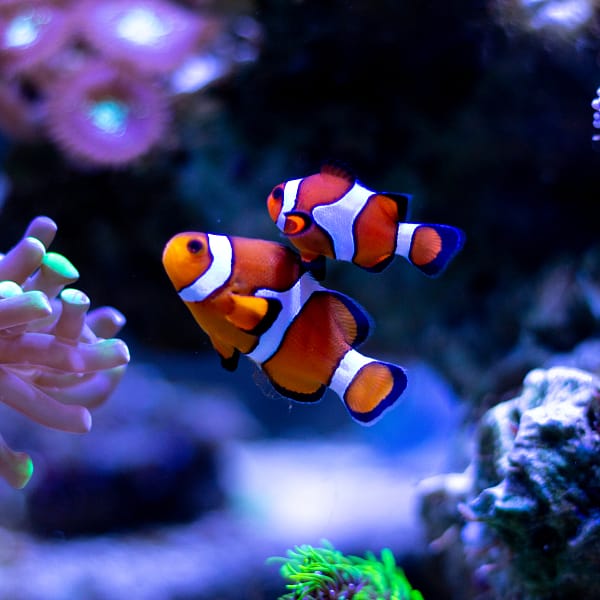 The ORA® Captive-Bred Frostbite Clownfish is a stunning and distinctive feature. The Frostbite was created by blending the best characteristics of the well-known Captive-Bred Snowflake Clownfish and the Captive-Bred Gladiator Clownfish. The Frostbite is embellished with black trims that wrap with bright orange tails and faces. As they grow older they begin to change to a vibrant blue along the edges of the white flanks. The stunning fish also have white spots or buckshot all over their bodies. This is a feature that varies between fish species, and therefore no two are the same.

This species of the Pomacentridae family is a great supplement to every saltwater aquarium. Fish that are captive-bred have a distinct benefit over species that are harvested wild because they’re generally resilient and more accustomed to the conditions of the aquarium at home. So, captive-bred fishes are an excellent choice for beginners and experienced aquarists alike.

The ORA® Captive-Bred Frostbite Clownfish is easily bred in a home aquarium. Clownfish lay eggs on flat surfaces and guard the eggs against other tank mates. The eggs usually hatch between 8 and 11 days, depending on the temperature of the water. The fry need to be raised in separate aquariums eating Rotifers, followed by brine baby shrimp.

This Clownfish is a very savage eater. It is tolerant of meaty and frozen herbivore recipes.

Frostbite Clownfish is produced by breeding the most desirable traits of Snowflake Clownfish with Gladiator Clownfish.