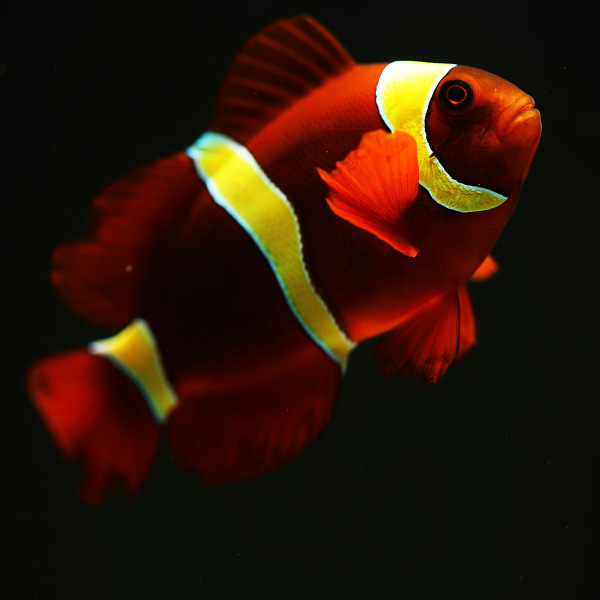 The ORA® Captive-Bred Gold Stripe Maroon Clownfish is an ideal fish to add to an aquarium with a reef. Typically, Maroon Clownfish vary in the color spectrum from bright red to dark with three thin white stripes. This ORA broodstock was discovered in the vicinity of Sumatra. The gold-colored stripes usually don’t develop until fish are around nine to twelve months of age. ORA fish are delivered around 6-7 months old which means they’re showing juvenile white stripes. They will begin to develop the gold color over time beginning with the stripe on their head.

The very well-known fish are simple to keep in aquariums. However, they don’t like each other. If a hobbyist is not able to get one of them to mate it is advised to one within a tank. There has been a report that the gold stripe variation appears to be less violent than those of the White Striped variety. It is among the most massive species of clownfish. adult females can reach an average size of 6. inches. This is a long-lived species of fish. ORA has seen pairs of them that spawned over 35 years.

Captive-bred Clownfish are extremely hardy and tough fish that make them an ideal choice for both the novice and experienced aquarist. It is believed that the Maroon Clownfish is a good choice to be a reef aquarium but they are sensitive to higher levels of copper and should not be exposed to levels that are close to or even above .15.

Captive-bred clownfish are simple to breed in the aquarium of your own home. Females are the biggest of the two, and the two fish usually be close within the aquarium. They are egg-laying fish and deposit their eggs on flat surfaces, and will protect eggs from tankmates. The eggs are usually born between 8 and 11 days, depending upon the temperatures. The fry need to be raised in a separate tank with a diet consisting of Rotifers and then the baby brine shrimp.

Don’t move or move the Maroon Clownfish with a net because its cheek spines could get caught. Make use of a specimen container to capture the fish if it is required.

It isn’t particularly immune to diseases and is among the most aggressive clownfish. As it gets bigger in size, the Wild Gold Stripe Maroon becomes more aggressive and is able to attack everything that gets close to its anemone. It is recommended that you include at least one anemone to your tank. Wild Gold Stripe Maroon should be kept in a medium or large aquarium. If you wish to keep a few of them, an aquarium of a larger size is required. It is safe for reefs and can be found in harmony with other invertebrates as well as corals. It is reef safe and requires no additional equipment. Wild Gold Stripe Maroon also requires live rocks as well as many hiding spots within the tank, so it can feed on the algae that are naturally created in the rocks. It is possible to keep it in a fish-only tank.