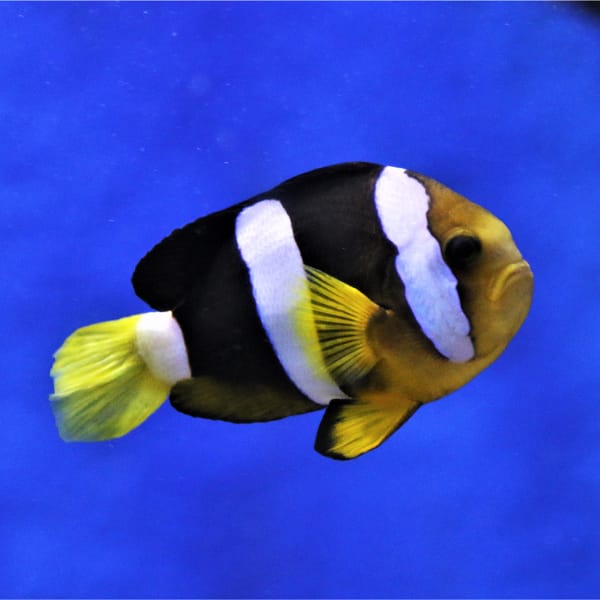 This ORA® Captive-Bred Clarkii Clownfish may also be known as Clark’s Anemonefish or Clark’s Clownfish. It is a reddish-brown base color, with white stripes and an orange forehead once fully mature. The juvenile fish are yellowish-orange in color, with three white stripes on either side of its body.

Captive-bred clownfish can be easily bred in your home aquarium. Females will be the largest of the pair and the two fish are likely to be close within the aquarium. They are egg-laying fish and lay eggs on flat surfaces, and protect them from tank mates. The eggs usually hatch between 6 and 11 days, based upon the temperature. The fry need to be raised in a separate tank eating baby brine shrimp and rotifers.

Captive-bred clownfish are omnivores needing both meaty and non-meaty food along with certain greens to supplement their diet. High-quality marine flakes, with a high concentration of spirulina algae along with frozen and freeze-dried food items, are widely accepted.

General information about the Clarkii Clownfish

It has a reddish-brown base color, with a white stripe and an orange head after it is fully developed. The young fish are yellowish-orange in color, with three white stripes along the sides on the back. The Clarkii Clownfish, Black has dark brown to black base and white stripes. Anal fins are white and have an orange stripe at the bottom and top. Clarkii Clownfish is the toughest, and hence one of the most commonly seen clownfish in home aquariums. An aquarium that is larger or medium and that has an anemone of any kind is ideal. It can be aggressive towards other clownfish as well as other tankmates who are passive. The diet of the Clarkii Clownfish consists of almost all meaty products and herbivore-based preparations.