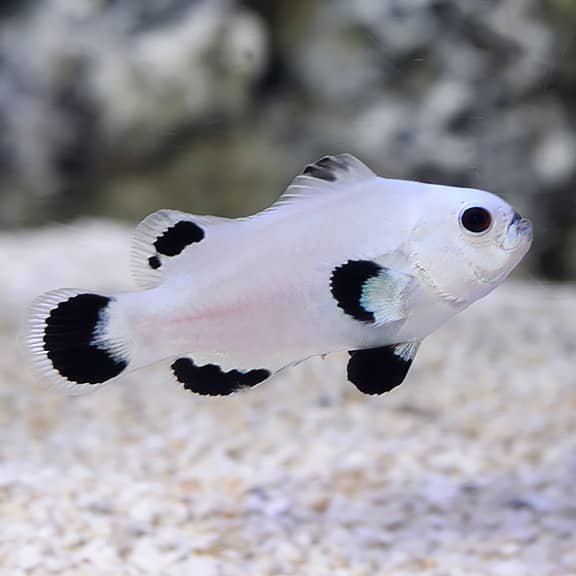 It is believed that the ORA® C.B. Snow Stormfish thrives best in an aquarium that is at minimum 20 gallons, or greater and with lots of rock. It could be a symbiotic partner with the following anemone species: Carpet (Stichodactyla Sp. ), Sebae (Heteractis crispa), Bulb (Entacmaea quadricolor), or Ritteri (Heteractis magnifica). Although they are not a requirement, the ORA® Snow Storm Clownfish is not dependent on an anemone in order to thrive, if you do decide to house an anemone make sure your lighting system and the aquarium can accommodate the requirements of your host anemone prior to adding one to the aquarium.

Captive-Bred Clownfish similar to the ORA® Snow Storm Clownfish offer advantages over wild-harvested species. First, they are extremely durable and familiar with the conditions of home aquariums. Thus, they are a great choice for home aquariums. ORA® Snow Storm Clownfish is an excellent option for beginners and experienced aquarists too. It can be kept in conjunction with many other clownfish that are captive-bred, if it is introduced to the aquarium simultaneously.

As well as other clownfish that are captive-bred, they can be raised in the home aquarium with ease and are among the most commonly used “starter” fish for breeders. Females are more dominant of the two and the two fish typically stay close to one another in the aquarium.

The Snow Storm Clownfish is an egg-laying species and typically lays the eggs onto a smooth surface near the host’s anemone. It will also defend the eggs against other tank mates. The eggs are usually born within 6 to 11 days, depending upon the temperatures. The fry need to be raised in separate tanks eating Rotifers, and then baby brine shrimp.

It is an omnivore that requires both fleshy food and greens as part of its diet. A premium marine flake food that is rich in spirulina algae along with frozen and freeze-dried food items is accepted by the majority of clownfish.

The Snow Storms Clownfish were first made by crossing the Black Storm Clownfish male to female Black Snowflake Clownfish.