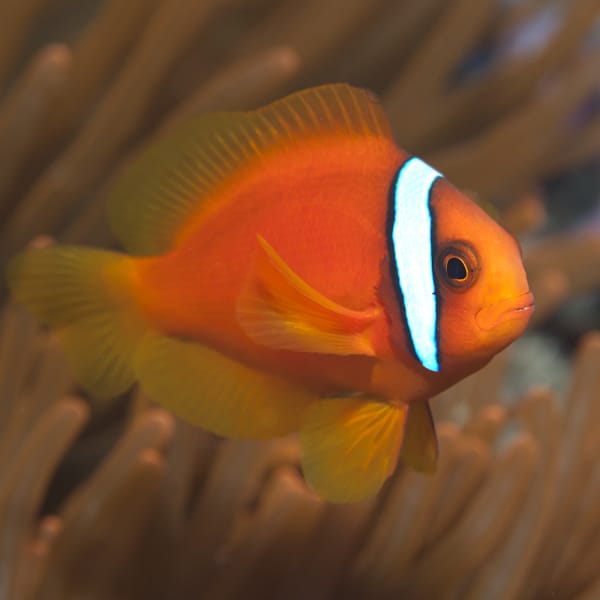 The ORA® Captive-Bred Tomato Clownfish is also called the Bridled Clownfish or Red Clownfish, is found across the Pacific and is almost always in conjunction with an anemone, such as Bubbletip Sea Anemone (Entacmaea quadricolor). This Tomato Clownfish has a wider area of distribution than those of the Fire Clown, which is typically restricted to Indo-Pacific reefs. It is also believed to utilize coral to host in absence of an Anemone. Captive-Bred Tomato clowns tend to be darker in color than their wild counterparts. However, as the fish matures it will change to the lovely red/orange shade. Juveniles are spotted with white bands, as well as black pectoral fins that slowly disappear as they grow older. It is possible to reach 5″ in length however, it typically reaches the max size of 3.5 inches inside an aquarium.

Captive-bred clownfish can be easily bred in your home aquarium. Females are the largest of the pair and two fish usually remain close to one another within the aquarium. They are egg-laying fish and lay eggs on a flat surface and protect the eggs from tank mates. The eggs usually hatch between 6 and 11 days, based upon the temperatures. The fry need to be raised in separate tanks with a diet consisting of baby brine shrimp and rotifers.

The Tomato Clownfish (amphiprion frenatus) are the color of a ripe tomato with a white vertical stripe which runs right behind their heads. The fish is one of the largest Clownfish species that can grow to 4 inches in size. Tomato Clown does not need an Anemone to live, but it can accept a variety of Anemones as well as corals. The most popular Anemone is Bubble Tip Anemones, but it might also accept Sebae Anemone or Long Tentacle Anemones as hosts.