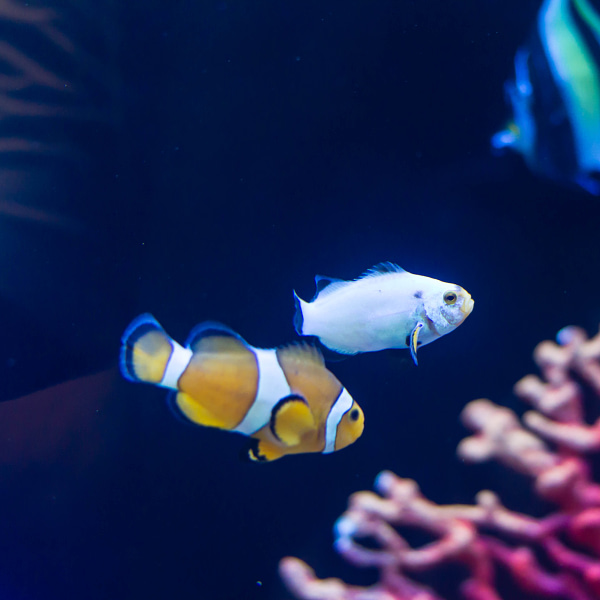 This Platinum Percula is a magnificent white variation of the Percula Clownfish. ORA® created this captive bred clownfish through years of breeding selectively their famous Picasso Clownfish. The striking fish don’t show any characteristics of the original striping in the species. Instead, they’re completely white, from the head down to the tail. As Platinums mature, they’ll develop beautiful black fins that make a statement in contrast to the body’s white.

Amphiprion Percula represents the definition of beauty. But, it’s the renowned symbiotic connection that the Percula Clownfish has with various anemones that really draws the attention of many aquarists. When in the wild Percula Clownfish are commonly associated with anemones , such as Heteractis magnifica, or Stichodactyla Mertensii.

It is native to reefs across Oceania, the Indo-Pacific, and the Indo-Pacific coast of Australia. The Percula Clownfish is also known as the Clown Anemonefish. Wild, this species of the Pomacentridae family can grow to around 4-1/2 inches. However, the captive specimens are usually less than 3 inches in size. For the home aquarium, it is recommended that the Percula Clownfish requires an aquarium with minimum 20 gallons and plenty of live rock.

It is the Captive-Bred Platinum Clownfish is easy to breed in your aquarium at home. Females are the largest of the pair. The two species typically stay close to one to each other in the aquarium. Clownfish are egg-laying fish that lay eggs on flat surfaces and guard them against the tank mates. The eggs are usually born between 8 and 11 days, depending on the temperature of the water. The fry need to be raised in separate aquariums with a diet consisting of rotifers, followed by baby brine shrimp.

The Platinum Clownfish diet consists of nearly all meaty foods and herbivore-based preparations.

The Platinum Percula is nearly all-white. It is derived from the famous Picasso Clownfish. The striking white clownfish develops black fins, then orange as it ages, and retains a bit of orange on the face. It is not to be confused with the Snowflake Clownfish, which is actually A.ocellaris. The Platinum Percula shows none of the stripes characteristic that the other species have. Although the center stripe in a snowflake is long and is characterized by sharp edges The Platinum Percula is continuously white from head to tail.