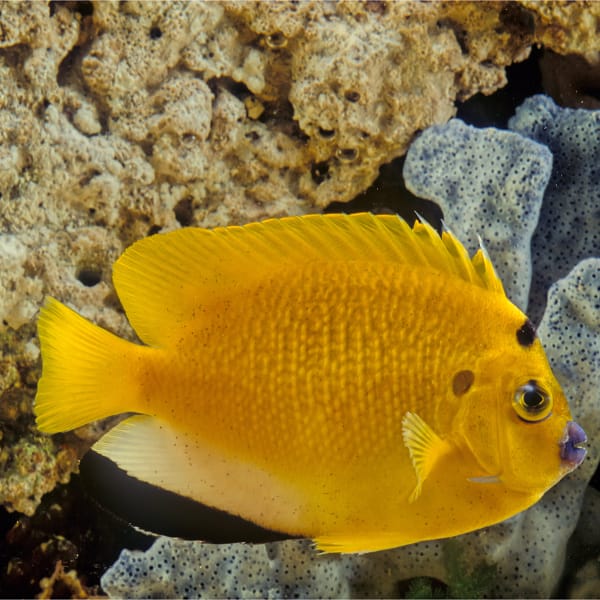 The Yellow Angelfish from the Cook Islands is often referred to for its False Lemonpeel Anglefish. It is bright yellow in its color. They are similar to the Lemonpeel Angelfish with the exception of the blue markings that surround the eyes as well as the edges of fins.
It is believed that the Yellow Angelfish requires a 70 gallon or bigger aquarium that has hidden areas and plenty of live rock for grazing. In an aquarium with reefs, the species can nip at large-polyped stony corals certain soft coral polyps and mantles of clams.

The diet of Yellow Angelfish should consist of Spirulina as well as marine algae. High quality angelfish preparations Mysis and frozen shrimp as well as other meaty products.

The Yellow Angelfish is a bright lemony yellow color that covers its entire body without marks. Yellow Angelfish are all born females. If you’re planning to purchase a breeding pair, it’s recommended to purchase in the same stage of their development and one being larger than the other and then wait for them to grow up. The bigger and dominant fish will go through a hormonal shift to male. When the fish grows into a male, a few will have marks of black on their face, but apart from this, they do not develop any other markings other than their eyes which is a bright yellow.

They are also known as the False Lemonpeel Angelfish because they are so alike. They are easy to distinguish due to the blue ring surrounding the eyes. The Yellow Angelfish does not have any blue marks on its physique however, it does have an edgier yellow smudge that is visible behind its eyes.

Wild Yellow Angelfish will breed with other Angelfish from similar, yet different species. Additionally, there are some that develop black fin markings because of this. It is interesting to note that the black markings will disappear when an aquarium is set up.

It is believed that the Yellow Angelfish is considered omnivorous however they are more herbivorous because they spend a significant amount of their time eating detritus and micro algae that have been deposited on rocks. Within their environment, they consume tiny crustaceans, algae and worms. When they feel stressed, they retreat to underwater caves and feed on the algae until they are able to leave. They must be fed between 2 and 3 times per day to replenish their diet of algae. The most important aspect of their diet is to make sure they’re eating enough plants. Their herbivorous aspect is crucial since the Yellow Angelfish that does not get enough nutrients can be blind in just a few months. Supplementing them with algae is also a great option to ensure this isn’t the case.

In captivity, they’ll be able to eat flake food as well as pellets of food. Live food is not required but can be used to lure those who aren’t eating.