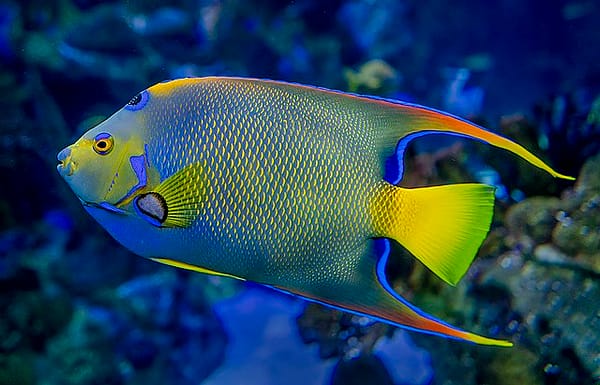 The diet of the Purple Masked Angelfish should include Spirulina as well as marine algae mysis, frozen shrimp and other meaty food items.

Also known as the Purple Masked Angelfish Venusta angelfish are quite uncommon dwarf angelfish with an orange face and body area that is adorned with blue triangular patches over the top of the head. They also have the blue saddle area which begins close to an anterior dorsal fin and extends across the rear part of the body and the caudal fin. The pelvic and anal fins are bordered with blue. The angelfishes are typically found to be found in steep outer corals and reef slopes that range from 20 to more than 130 feet (6 40 meters) deep. Most often, they are seen as a single fish in deep reef slopes and caves.

In their natural habitat, Venusta angelfish take in tunicates, sponges and other crustaceans. In captivity, these fishes can be fed frozen food, including brine fortified shrimp, mysis and meals that contain sponge matter, or angelfish-specific meals that are offered often throughout the day.

The Purple Masked Angelfish are known as being distributed across Japan across northwestern Philippines.