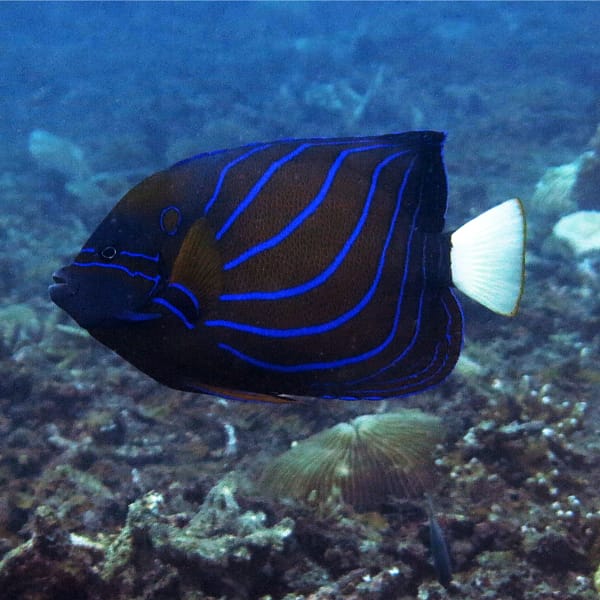 Annularis Angelfish is also referred to as the Blue Ring Angelfish and Blue King Angelfish because of its stunning sapphire stripes on an overwhelmingly brown body and the whitish-blue tail.

A minimum of 200-gallon tank size is needed for an Annularis single. Make sure you have plenty of hiding spots like caves or live rock to feed. One word of caution This species can nibble at sessile invertebrates right from the bottom like corals, nudibranchs as well as tridacnid (three-footed) clams. Therefore, this Annularis Angelfish would not make an ideal reef dweller. The Annularis is considered to be semi-aggressive. Annularis could become territorial after having adjusted to its tank.

The majority of Angelfish are considered to be hermaphrodite, and, as such, it’s difficult to distinguish between males and females.

An Annularis’ diet Angelfish must include meats, vegetables and angelfish food preparations with sponge-like products. At first, the fish might need to be fed live food like brine shrimp or freshly cut seafood to encourage it to eat.

General information on Annularis Angelfish
Annularis Angelfish spawned and reared in saltwater ponds on land in Bali Indonesia. As a young fish the stripes run vertically and range from white to light blue, before changing into the vibrant sapphire stripping that is seen in adult fish. The young body’s black color is also beginning to soften to the brownish hue that is seen in adults. As adults they sport stunning sapphire stripes that stretch diagonally from their chests all the way to their soft posterior dorsal fins with a body that is predominantly brown and a whitish-blue tail. While these fishes are able to live in smaller-sized aquariums in the beginning but a large tank is essential for an individual Annularis adult because they can grow to be quite big. Make sure you have plenty of hiding spots like caves or live rock to allow them to graze. Similar to other large angelfish, they are known to nibble at sessile invertebrates like feather dusters, tube worms and clams, as well as soft and hard corals. All Angelfish are hermaphrodites and visually it’s difficult to distinguish males from females, with the only difference in their body shapes when they’re fully mature. Furthermore, these fishes are semi-aggressive and can be territorial after acclimatization to their aquarium.

Annularis Angelfish Diet & Nutrition
The Ble-ringed Angelfish Pomacanthus Annularis are omnivores that feed on benthic invertebrates like the zooplankton, sponges and tunicates as well as coral polyps. Additionally, these fish consume algae, ascidians, weeds and nektonic fishes. In the aquarium, this fish is able to feed on prepared mixes containing sponges and frozen meaty items like shrimps, diets that are rich in algae like Nori flakes.
Adults are required to eat at least two times a day, while juveniles should be fed between 3 and 4 times per day.

Annularis Angelfish Origin
The species is widespread throughout the Indo-Pacific region that extends between Sri Lanka to the Solomon Islands and also from the Philippines until the northern point of Australia.