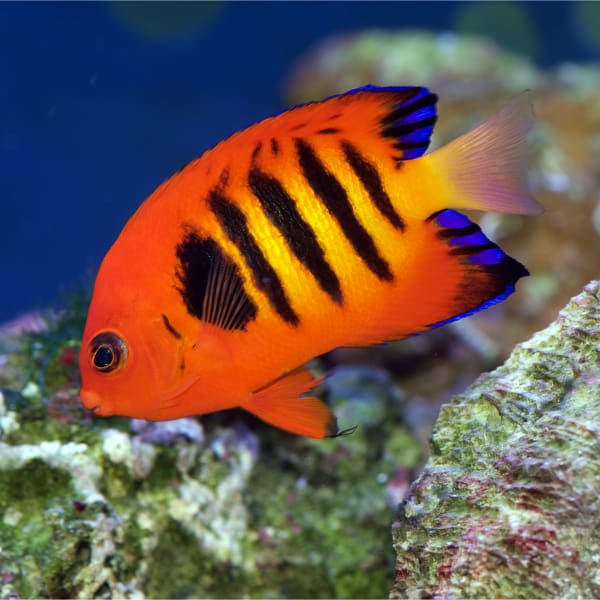 A Flame Angelfish is hermaphroditic, extremely difficult to reproduce in aquariums, and doesn’t have any discernible distinction in color between males and females.

The diet of the Flame Angelfish should consist of Spirulina and marine algae premium angelfish preparations Mysis and frozen shrimp as well as other meaty products of high quality.

There are slight variations in the markings and coloration of this species depending on the area of the collection. Flame Angelfish from the Central Pacific includes each of Marshall Islands and Christmas Island. Marshall Island Flame Angelfish are more red, and have more black bars that run vertically across the body. Christmas Island Flame Angelfish are typically red/orange with black bars that are thin and run horizontally across the body. Flame Angelfish from Cebu are red/orange and have black bars with no definition and a tinge of yellow between them. Flame Angelfish from Tahiti are seldom seen and are blood red in appearance and contain little to none yellow. It is vital to understand that these descriptions of color are general guidelines. There will be some variation between every species of fish. The differences in price between various kinds reflect the differences in the collection, transport and import cost.

In the wild centropyge’s diet, loricula also known as Flame Angelfish consists of algae and crustaceans. In the home aquarium, the fish can be fed different diets which includes mysis shrimp, brine shrimp and clams, as well as marine algae like Spirulina and seaweed sheets and certain pellets. They are recommended to feed them 3 times per day and a tiny amounts of food.

Flame angelfish can be found in Central Pacific starting from the Philippines up towards Pitcairn Islands, and Tonga northern up to Northern Marianas and Hawaii, and south to New Caledonia and Queensland in Australia.