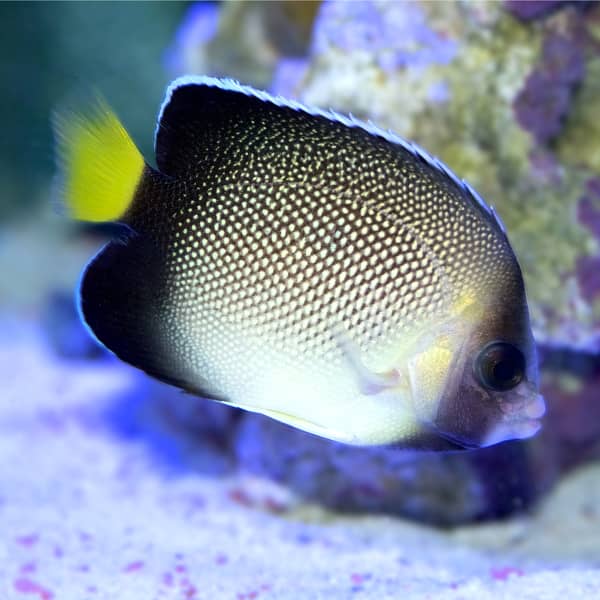 The Xanthurus Cream Angelfish is also called the Indian Yellowtail Angelfish, Cream Angelfish as well as Yellowtail Black Angelfish. In keeping with its Latin name, the caudal fin of the fish is yellow. The dorsal fin’s outline is drawn by a silvery-white line.

The Xanthurus Cream Angelfish adapts readily to life in aquariums. It needs an tank of 125 gallons or more with plenty of hiding areas and live rock to graze provides a natural environment that allows it to flourish. It can be prone to nip at soft and stony corals (sessile invertebrates) and mantles of clams. It is best to keep only one specimen kept in each tank.

It is a hermaphrodite There are no distinctive characteristics that differentiate males and females.

It is the Xanthurus Cream Angelfish true to its Latin name and the caudal fins are yellow. The dorsal fin is highlighted by a silvery white line. It is known as the Xanthurus Cream Angelfish adapts readily to life in an aquarium. It needs a big tank that has plenty of hiding spots. Live rocks to graze will provide an environment for it to flourish. It can be prone to nibble at soft and stony corals (sessile invertebrates) and mantles of clams. It is advised to only have one specimen kept in each tank. It is a hermaphroditic species, and there are no distinct characteristics that differentiate males and females.

The Indian Yellowtail angelfish are Omnivores. They are mostly herbivores that can be found feeding on algae in sponge material, rocks as well as tunicates, and even small amounts of compepods.

The species is usually located within this region of Western Indian Ocean, which includes Mauritius, Maldives, Sri Lanka and Indias east coast. An unusual sighting that was clearly part of an aquarium’s release was spotted near Osezaki, Japan.