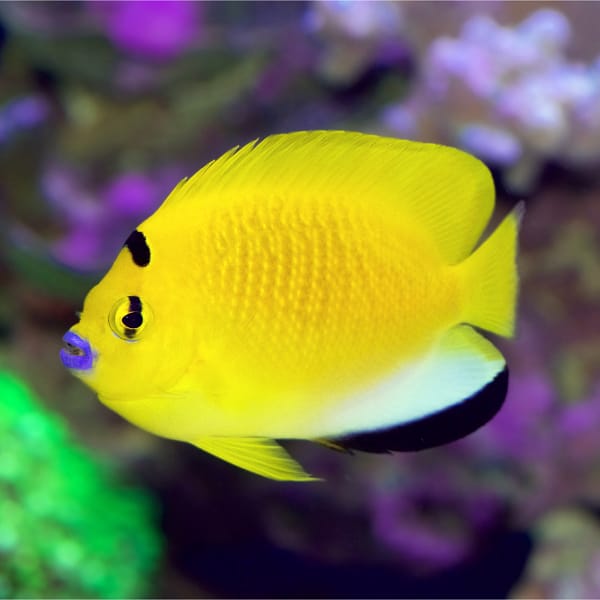 Flagfin Angelfish Flagfin Angelfish, also referred to as the Threespot Angelfish, is a stunning yellow color with blue lips. an elongated dorsal area that is dark blue-black in which
The head and body are joined there is the eye is joined by a light brown spot behind the eye.

There are plenty of areas to hide in a tank of 125 gallons or more as
The Flagfin Angelfish can be quite timid at first and is not likely to be the sole angels within the aquarium. It is not a good reef dweller. The Flagfin Angelfish is prone to bite sessile invertebrates (soft and stony corals) and the clam mantles.

It is a tough angelfish to keep because of its diet requirement of
sponges and its limited ability to adjust to different foods. It is possible to make a difference by offering its dietary requirement of sponges with frozen angelfish rations that are vitamin-enriched, mysis shrimp an abundance of plant material as well as live rock for grazing or hiding.

Flagfin Angelfish Diet & Nutrition
This is an omnivore, and is primarily consumed by tunictaes and sponges together with algae. It is recommended to enrich the tank with brine shrimp or mysis to stimulate the feeding response of the fish once it is introduced to the tank. After acclimatization, food items like those that contain sponges, spirulina and algae sheets, fish pieces and shrimp are recommended to be fed in small quantities several times daily.

Flagfin Angelfish Origin
Apolemichthys trimaculata and Flagfin angelfish are widely distributed in the Indo-West Pacific covering the south east coast of Africa up to Samoa the southern portion of Japan towards Australia’s northern coastlines and islands.