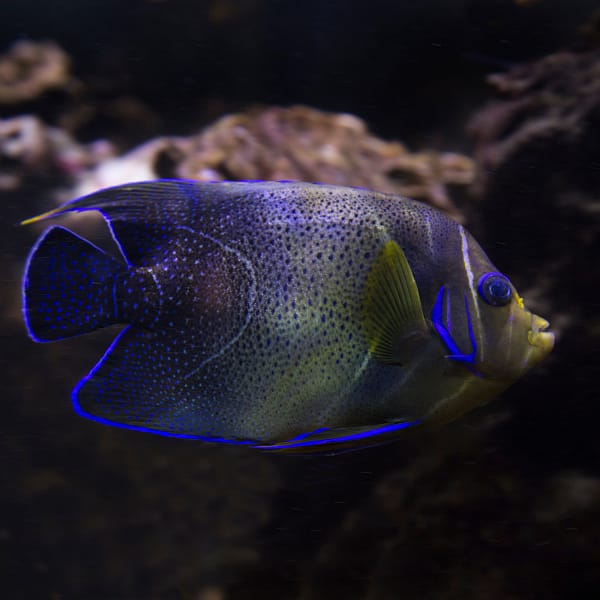 The Koran Angelfish, also referred to as the Semicircular Angelfish or Halfcircled Angelfish is a very popular and tough angelfish. In adulthood the color of the body is a green-yellow that runs from light to dark, moving forward and backward along the body. Some areas appear speckled blue while darker areas display an appearance that is more yellow-speckled. The head is plain yellow-green color with blue sapphire eye rings and gill margins. Also, the fins have been highlighted with sapphire blue. The juveniles are black with blue and white stripes.

The Koran Angelfish requires 250 gallon or more tank that has plenty of live rock to hide and eat slime algae and cyanobacteria. It can be prone to nibble at stony and soft corals (sessile invertebrates) and clam mantles, so it’s not a suitable choice for reef aquariums.

A diverse diet of Spirulina and marine algae top-quality angelfish preparations, as well as mysis, or frozen shrimp, should be provided 3 times per day.

General information on Koran Angelfish
The Koran Angelfish is an extremely popular and tough angelfish. When it is an adult the color of the body is a yellow-green hue that varies from dark to light moving forward and backward along the body. Some areas of lighter color are speckled blue, while darker areas display more of a yellow-speckled look. The head is plain yellow-green color with sapphire blue eye rings and gill margins. The fins are also outlined by sapphire-blue gills. The juvenile is black, with blue and white stripes. Koran Angelfish Koran Angelfish requires a large tank that is filled with live rock to hide and eat slime algae as well as Cyanobacteria. It can be prone to nip at stony and soft corals (sessile invertebrates) and clam mantles, so it’s not the best choice for reef aquariums.

Koran Angelfish Nutrition
Koran angelfishes are omnivore species that consume a variety of algae, tunicates and sponges, and other creatures in the wild. In captivity, they can be fed a variety of frozen, live and even prepared formula food. It is crucial to include vegetable-based foods in their diets as along with meaty dishes such as squid and scallops that are chopped and shrimp. Food prepared using marine sponge as a component is also vital.
This fish should be fed three or more times every day.

Origin of the Koran Angelfish
Koran angelfish are located throughout the Indo-Pacific region, which spans from the eastern coast in Africa up to Fiji and Japan as well as the eastern coastline and the east coast of Australia along with New Caledonia.