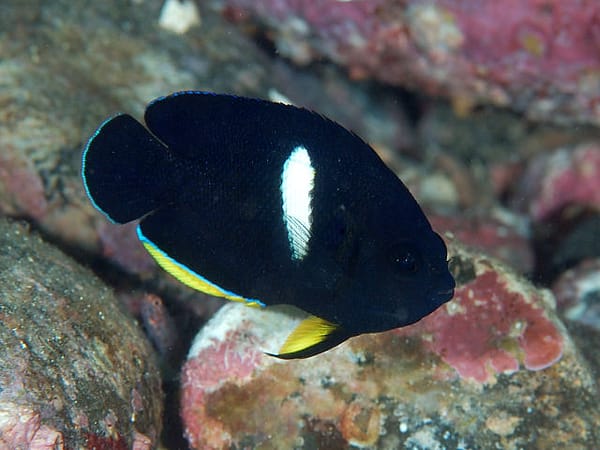 A 70 gallon or larger tank is a must and plenty of live rock to hide and eat. The rock could get a nip at
The soft and stony corals (sessile invertebrates) and mantles made of clams. It can
Also, filamentous algae feed on and diatoms.

It is hermaphroditicand very difficult to reproduce within an aquarium and also has no
distinct color differences between males and females.

Sometimes overlooked due to its simple appearancethe Keyhole Angelfish is an excellent option for the larger marine aquarium due to its ability to eat filamentous algae as well as diatoms that are growing on the rocks and decorations. This  Angelfish is among the largest centropyge (7.5″) in size) and may become very aggressive with other pygmy angelfish that aren’t introduced in the same manner. It is one of the Centropyge Angelfish which must be kept in an aquarium using live rock as filtration or decoration. They have been seen taking stony and soft corals, as well mantles, but we’ve observed them living happily in fully reef tanks for a long time without any issues. Be aware of the fish in case you have coral, and change its diet if it is bothering sessile invertebrates. It isn’t likely to harm or even be aware of non-sessile vertebrates like crabs or shrimp.

In the wild, the Keyhole angelfish is known to have a wide diet that includes crustaceans and algae. The Keyhole angel isn’t considered reef-safe because it could be a nuisance to massive polyped stony corals Zoanthids and soft corals or mantles from clams. Some specimens have very long lives in aquariums with reefs as tranquil residents, but the majority of the fish frequently change their habits in a random manner once they age. This could be explained since a large portion members of species in the Centropyge family are primarily plankton-eaters as juveniles, and then switch to their natural adult diet after they are fully mature. Sometimes, all is required for an animal that is undernourished to test the food source. If this is the scenario, ensure that you include this fish in an existing tank. feed mysis shrimp frozen fleshy crustaceans, such as shrimp and clams. Make sure you include algae like Spirulina.