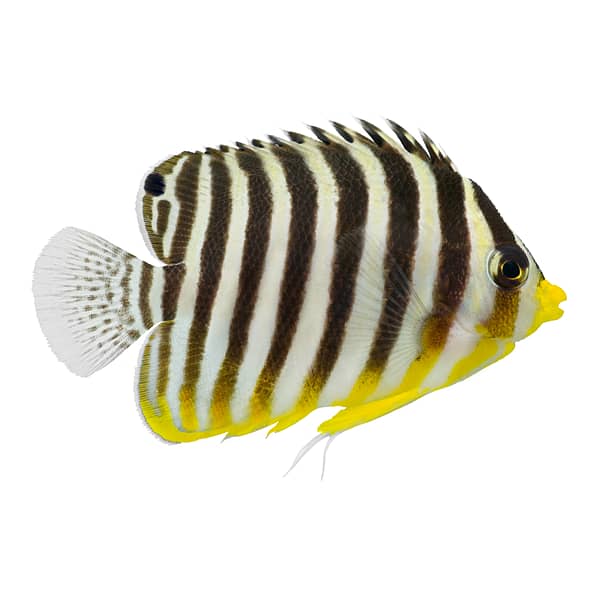 The Multibar Angel, also known as the Many Banded Angelfish and Multibarred Angelfish is made up of individual vertical bands of black and yellow with an “every other” style and an elongated stripe of white surrounding the black bands. The tail is white to yellow, with tiny black speckles. The juvenile can be identified by the blue eyespot that is located in the rear on the fin’s dorsal side.
This Multibar Angel requires a minimum tank size of 70 gallons, with many hiding spots as well as live rock for grazing. The angelfish should be kept as the sole species in the tank.

Multibar Angels, also known as Multibar Angel, like other dwarf angels, is hermaphroditic and difficult to breed and indistinguishable with color variations between males and females.

The Multibar Angel can be a sensitive eater. It likes an assortment of smaller food items that are meaty, such as angelfish, herbivore dishes, and even sponges that are alive. The aforementioned eating habits, along with the characteristic of becoming territorial after acclimatization make it a difficult fish to keep.

This species is an elongated species of small angelfish. It has a white base color and eight vertical black bars which turn yellowish ventrally as it increases to 12 centimeters. The juveniles have fewer bars and have a distinct dorsal fin ocellus which fades as they grow. It is typically found to be found in caves and crevices on the reef’s outer slopes. They are located in depths ranging from 20 and 70 m.

Multibar Angelfish Diet & Nutrition
They take in sponges, algae tunicates, algae, and benthic invertebrates as well as small crustaceans. They are often be observed foraging upside down in caves’ ceilings. In captivity, they can be secluded with a diet of frozen and cooked food items like pellets of fish food or the flakes of Artemia, Mysis, mussels and fresh oysters.

Multibar Angelfish Origin
Paracentropyge multifasciatus are found in a broad geographic distribution throughout the Pacific Ocean, and into the Indian Ocean peripheries. Particularly in the area of Cocos-Keeling atoll and the Society Islands, ranging north to the Yaeyama Islands and south to the Great Barrier Reef.