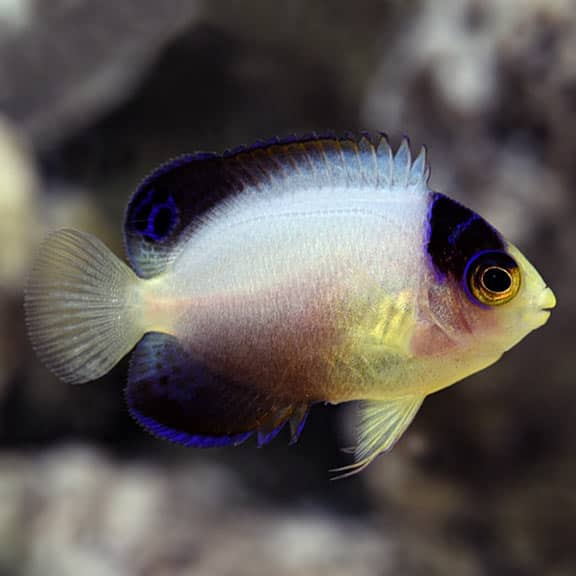 Multicolor Angelfish Multicolor Angelfish, also known as the Pastel Pygmy Anglefish as well as the Many-colored Angelfish, is pale between yellow and peach. Black speckles over the blue background highlight an area that is just between the eyes. The dorsal and the anal fins are blue-black , while the caudal fin has yellow. In stark contrast to the other colors, it has an horizontal stripe of silvery white from mid-body towards the caudal Fin. This Multicolor Angelfish needs a minimum of a tank that is 70 gallons with lots of hiding spots and live rock to graze on microalgae. It thrives in dim lighting since when it’s in its natural habitat, it’s an aquatic swimmer in deep water. Its Multicolor Angelfish may nip at soft and fleshy corals (sessile invertebrates) and mantles of clams. The fish is sensitive to copper-based medicines.

The diet of Multicolor Angelfish should include Spirulina and other high-quality preparations for angelfish Mysis or frozen shrimp as well as other premium meaty products.

The Multicolor Angelfish is a pale peach orange to yellow. Black speckles over the blue background highlight an area that lies just in front of the eye. The anal and dorsal fins are blue-black, while the caudal fin appears yellow. Contrasting with the other colors, there’s an asymmetrical swatch of silvery white from mid-body until the fin at caudal. It is a Multicolor Angelfish needs lots of hiding spots and live rock for grazing on microalgae. It is most effective in dim lighting since when it’s in its natural habitat, it’s an underwater swimmer. If it is to be kept in a tank, the Multicolor Angelfish is to be placed in a tank together with other dwarf angels, it is best to keep them in a separate area. Not a reef-friendly fish and the Multicolor Angelfish is prone to nibble at soft and stony corals (sessile invertebrates) and mantles of clams. It is susceptible to copper-based medicines.

Multicolor Angelfish Diet & Nutrition
Centropyge multicolor are herbivores that are well-known. In the wild they feed on plants, such as benthic algae and weeds, and zoobenthos, which comprise hard coral polyps, sponges ascidians (sea squirts) and tunicates. They are able to feed easily in aquariums with a variety of diets comprising Spirulina and high-quality angelfish products, mysis, frozen shrimp, as well as premium meaty foods.

Multicolor Angelfish Origin
This species is known to be widespread throughout areas of the Central Pacific specifically in the regions that include Marshall Islands, Marianas, Palau, Society Islands, Fiji, Cook Islands and Hawaiian Islands.