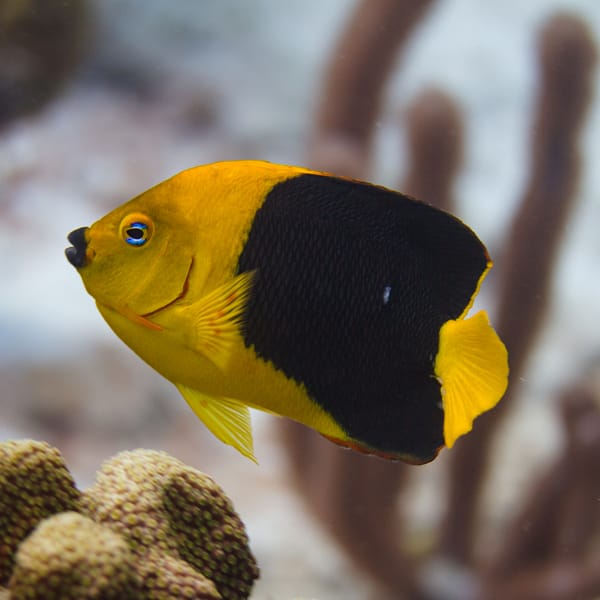 Considered by many as the most stunning among the Centropyge family of pygmy or dwarf angelfish The Bicolor angelfish is also referred to as the Two-colored angelfish or Oriole Angelfish, is a bright yellow on the front part of the body and an intense blue on the side that is posterior. A splash of blue extends vertically up from the eye towards at the very top. Then the tail is yellow.
An at-least 70-gallon tank size that has plenty of hiding places as well as live rock to graze on can provide a habitat where the fish can thrive. A reef-dweller is not a great choice The Bicolor Angelfish can nibble at soft and stony corals (sessile invertebrates) and mantles of clams.

It is asexual, extremely difficult to reproduce in an aquarium and doesn’t have any discernible colors that differ from males and females.

The Bicolor Angelfish needs an omnivorous diet consisting that includes Spirulina as well as marine algae top quality angelfish products, and mysis, which is frozen shrimp.

Thought by some to be one of the striking among the Centropyge family of angelfish that are pygmy or dwarf. The Bicolor Angelfish is a vivid yellow color on the anterior portion of its body, and deep blue on its side that is posterior. A swath of blue extends vertically upwards from the eye all the way to above the head while the tail has a yellow. A poor reef dweller The Bicolor Angelfish has a tendency to nibble at soft and stony corals (sessile invertebrates) and mantles of clams.

Bicolor angelfish are believed as benthic omnivores. Their diet tends towards fleshier food. Around 30 percent of their diet is comprised of algae. As they age, 70 percent of their diet comes from corals crustaceans, polychaeteworms, sponges, and other invertebrates. The amount of food they consume should be based on their the stage of life.

If they are kept in a reef tank it is suggested to provide them with an assortment of live frozen, frozen, or prepared formula food. The formula food is prepared and consists of mysis, spirulina algae shucked fish, frozen shrimp and angelfish food made of sponge material.

Bicolor angelfishes need to be fed at least 2 or 3 times per day, based upon the dimensions of your tank as well as the amount of algae that is natural to source. A larger tank and a greater amount of natural algae could reduce feeding frequency up to 1 or 2 times every day.

Centropyge bicolor is one of the most populous and widely distributed species in the Indo-Pacific region. It ranges across East Africa to the Samoan and Phoenix Island, north to southern Japan from south Japan towards New Caledonia, and throughout Micronesia. It is also located within the Fiji Islands, Indonesia, Vanuatu and in a few areas within The Great Barrier Reef in Australia.