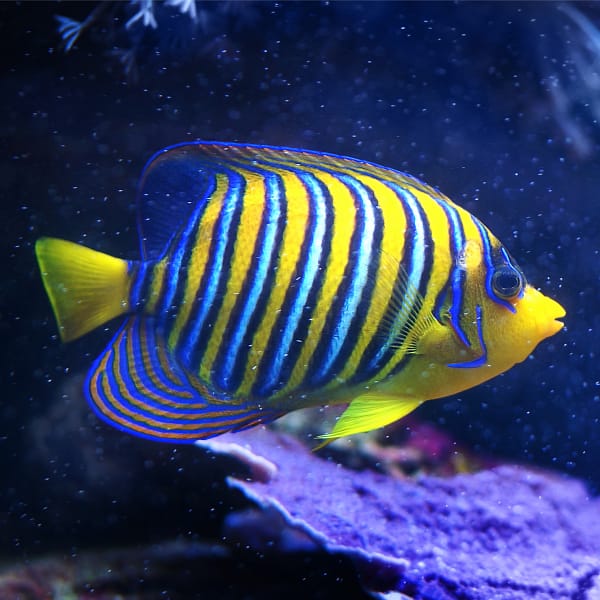 With striking vertical striations of blue yellow, white, as well as orange on their pelvic fin it is no wonder that the Regal Angelfish deserves this distinctive name. Regal Angelfish from the Maldives and the Red Sea have a distinctive yellow breast, whereas their Indo-Pacific, Coral Sea, New Caledonia and Tahitian relatives generally have a blue gray body. This hue is more common in fish which are older and at or above 4″ long. Young fish will display the “False Eye Spot” on the dorsal fins. This color diminishes as the fish grows.

Regal Angelfish From The Red Sea, Maldives, Coral Sea, Fiji and Tahiti are excellent shippers. They are handled and harvested with care. They can be adapted more quickly than Indo-Pacific counterparts in a home aquarium.

It is believed that the Regal Angelfish is more difficult to keep than other angel species and should therefore be introduced first to establish its territory ahead of other fish. A minimum of 125 gallon tank that has many hiding spots as well as live rock to graze on can provide a healthy habitat. It is believed that the Regal Angelfish may nip at large-polyped stony coralsand an occasional soft coral, and occasionally mantles. They can be kept in a tank with smaller-polyped stony corals, as well as somewhat noxious soft corals.

General information about Regal Angelfish
With striking vertical stripes of blue, white and yellow on the the pelvic fin it is no wonder that the Regal Angelfish deserves this distinctive name. Regal Angelfish from the Maldives and the Red Sea have a distinctive yellow breast. Their Indo-Pacific Coral Sea, and Tahitian cousins typically have a gray/blue breast. This coloring is more prominent in specimens that have matured and have above 4″ to length. Regal Angelfish originate from Red Sea, Maldives, Coral Sea, Fiji and Tahiti are great shippers. They are harvested by hand with great care and usually adjust more quickly than their Indo-Pacific counterparts in the aquarium of your home. Regal Angelfish is more difficult to care for than other angel species, and should be introduced initially to allow it to mark its territory before other fish. A large tank that has lots of hiding spots and live rock to graze is a great habitat. Regal Angelfish Regal Angelfish may nip at the large-polyped corals of stony reefs, and an occasional soft coral or mantles. However, they can be kept with smaller-polyped stony corals as well as somewhat noxious soft corals.

Regal Angelfish Nutrition
The Regal Angelfishes, carnivores. They are well-known for their consumption of tunicates and sponges. In an aquarium they thrive on a diverse diet that includes food items like nori seaweed mysis shrimp, and other chopped meaty food items.

Origin of the Regal Angefish
Regal angelfish are abundantly distributed across the Indo-Pacific region that spans all the way from Red Sea and East Africa to the Tuamoto Islands, north to Ryukyu and Ogasawara Islands in Japan south of the Great Barrier Reef and New Caledonia.