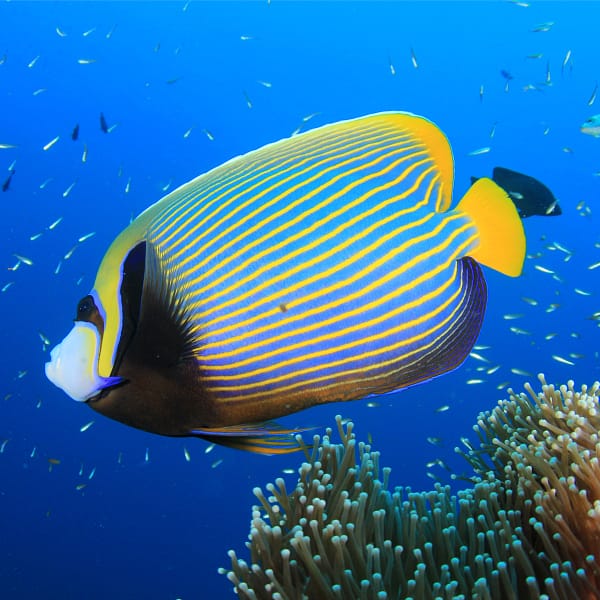 The mature Emperor Angelfish, also called the Imperator Angelfish, has a large, blue body, trimmed with bright horizontal stripes of yellow that culminates in a vibrant caudal fin that is orange to yellow. A striking The eyes are covered in a blue-black mask and a similar vertical band is visible across the pectoral fin a quarter of the way across the body. The band is highlighted with the front with a sapphire blue, and bright yellow in the back.

It is black, with blue and white stripes that begin at the tail. While sought-after for its color in captivity the adult. The color may not be as stunning or spectacular. The color and pattern change from young to adult coloration.

The Emperor Angelfish requires a 220 gallon or larger tank that has live rock for grazing and hiding. They also require large caves and extensive rockwork to feel safe. They can attack soft and stony corals (sessile invertebrates) and clam mantles however, it can be kept with tiny-polyped corals, and possibly toxic soft corals.

It is recommended to feed it with a diet consisting of Spirulina as well as marine algae. premium angelfish products Mysis or frozen shrimp, and various fleshy foods.

A popular among photographers of nature The Emperor Angelfish (scientific name: Pomacanthus imperator) is among the most well-known fish species around the globe. It was first discovered in the late 1800s, the fish has been included in everything from books to TV shows. It’s not difficult to figure out the reason! Due to its vivid color Due to its vibrant coloration, thanks to its bright coloration, Emperor Angelfish is a quick head-turner. They are often the star of coral-filled aquariums across the globe. They are often identified by their name as Imperial as well as Imperator Angelfish. The natural range for this species of fish is extensive. They’re indigenous of their home in the Indo Pacific ocean, spreading across East Africa to New Calcedonia. Despite their fame the wild populations are growing. Extremely difficult to take care of These fish require attention and are the focus of interest in your saltwater aquarium!

Emperor Angelfish are omnivores. When they’re in the wild, they’re thought to be more clean fish. They consume nearly everything they come across in the surroundings. As you introduce your aquarium fish, they’ll be resistant to eating. For the first few weeks, let them search for food in rocks that live. That’s another good reason having a tank established can be beneficial! Once you have done that, you can gradually introduce food items into the tank. Emperor Angelfish are fond of foods such as Spirulina algae, Spirulina, and commercially-produced marine fish foods. It is also possible to create customized meals using frozen or live fish. Shrimp, chopped scallops and squid chunks are all popular for protein. If you are looking for plant-based food include sea algae and spinach.

For the first few weeks inside your fish tank, you should feed your fish around five small meals per day. After that, gradually increase the amount from three to four meals.