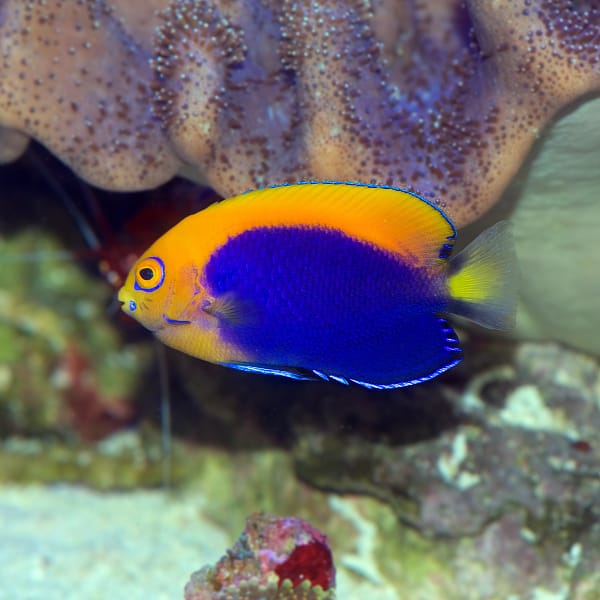 Food choices for The diet of the Flameback Angelfish should include Spirulina and marine algae, premium angelfish dishes, mysis or frozen shrimp, as well as other fleshy meals.

The Flameback Angelfish has striking contrasts of orange-yellow and blue colors. Although the body is predominantly blue, there’s an extensive and vibrant orange-to-yellow stripe that runs starting from the head and running back of the dorsal fin. Its caudal fins are yellow and a bit transparent, which makes it stand out in comparison to other species of Brazilian Flameback Angelfish. At times, the fish might nip at SPS and other kinds of Polyp Corals within Reef aquariums.

Angelfish with flamebacks are all-omnivores that feed predominantly on invertebrates and algae. The diet in captivity could include mysis shrimp frozen and Spirulina algae. Food preparations for angelfish, such as pellets as well as other frozen food items could be fed to these angels.

Centropyge acanthops first appeared in the coastal areas East in Africa. Its range extends across the western part of the Indian Ocean particularly from Oman and Somalia south to East London, and east to Madagascar, Seychelles, Comoros, Mauritius, Reunion and the Mascarene Islands. It also extends into the Maldives.