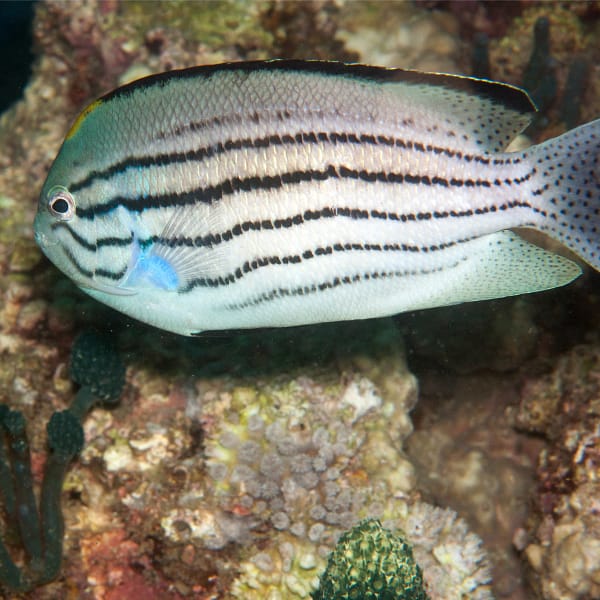 Watanabe’s Angelfish are best kept as a male and female pair in a larger 125-gallon tank. They’re also excellent fish for the reef in deep water aquarium. It is easier to adjust with a dimly lit tank. The tank should be equipped with multiple areas to hide and live rocks to graze on. Don’t keep two males in the same tank fights could ensue.

Watanabe’s Angelfish are hermaphrodites and are very difficult to reproduce. The Watanabe’s Angelfish appear to be extremely vulnerable to swim bladder damage. A diverse diet that includes fleshy foods like brine shrimp that are vitamin-enriched and finely chopped crustacean flesh and spirulina marine algae, premium angelfish-based preparations, mysis, frozen shrimp, as well as other meaty foods will give adequate nutrition.

Watanabei Angelfish Food & Nutrition
Watanabe’s Angelfish predominantly feeds on plankton that is found in the wild along with pelagic tunicates that are sucked up from the bottom of the water column. Their mouths and teeth are well-adapted for catching floating food particles instead of taking off coralline or algae.

Origin of Watanabei Angelfish
The wild G. watanabei ranges all over the Pacific and is found from Japan all the way to and including the Philippines, South to New Caledonia and in the Austral islands and Melansia. When it comes to trade they are usually taken and sold from the Philippines and Coral sea, but rarely from Melanesia.