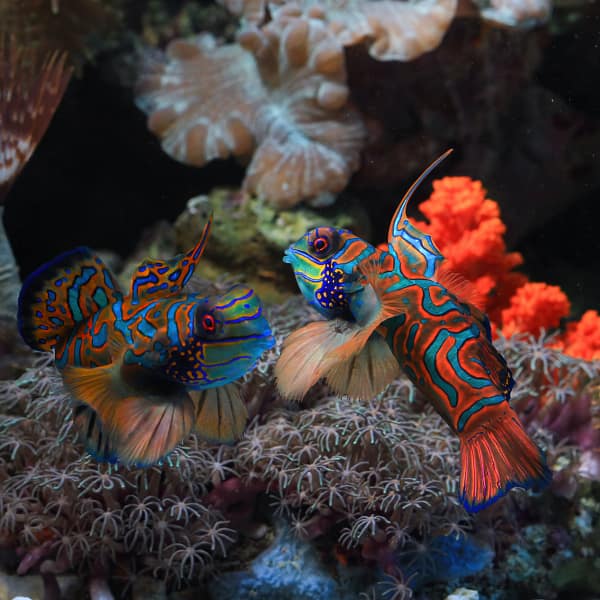 The Spotted Mandarin, also referred to as the Spotted Mandarinfish, Psychedelic Mandarinfish, Psychedelic Fish, or Picture Dragonet, was first discovered within the Western Pacific Ocean in 1976 by Peters. The fins, head, and body are a psychedelic mixture of orange, blue, and black spots that are set on a green base. Males can be distinguished from females due to their longer first dorsal spine.

It needs a 30 gallon or larger aquarium that has a living substrate and lots of hiding spots. It is moderately resistant in reef aquariums when given specific attention. It’s not particularly antagonistic to other tank mates with the exception of the conspecifics.

The Spotted Mandarin has been known to reproduce with success in aquariums.

The diet should include various live brine shrimp that are vitamin-enriched and live blackworm. They will feed on natural prey from live rock and live sand.

Are you looking for the most nutritious food source to feed your Dragonettes? We suggest the AlgaGen Tisbe biminiensis.

The Spotted Mandarin (synchiropus picturatus) head, fins as well as body, are a psychedelic blend of orange, blue, and black spots on a white base. Males can be distinguished from females because of their longer dorsal spine. It needs an aquarium with an active substrate and many hiding places. It can be moderately tough in reef aquariums when provided with special attention. It’s not particularly aggressive against other fish, except for the conspecifics. Spotted Mandarin has been known to successfully spawn in aquariums.