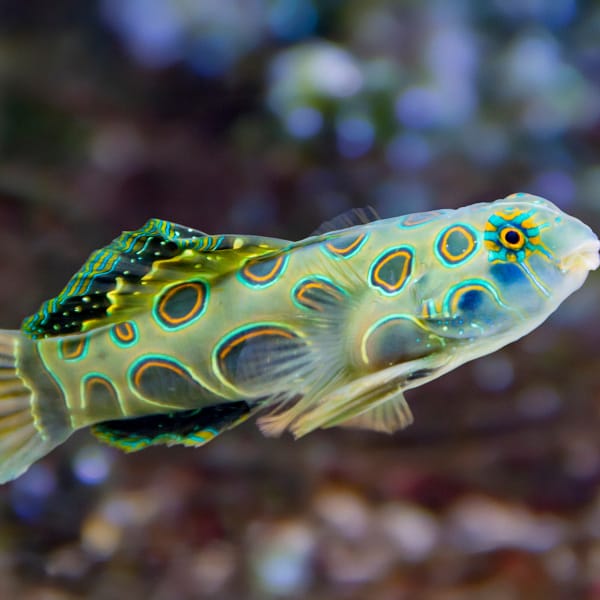 The body and head of the Red Mandarin Dragonet are a maze-like mixture of orange, blue, and red. Males are distinguished from females by their long first dorsal spine. The red variant is a variation of Mandarin species is an extremely rare find in the fish market and is extremely sought-after by aquarists for its distinctive beauty. In contrast to the green mandarin this red variety is much larger and has more prominent red stripes as well as red pectoral fins.

It is best kept in a mature, 30 gallon or larger tank with plenty of live rock, live sand and hiding spots. It can be moderately tough in mature reef aquariums if taken care of. It’s not hostile to other fish, with the exception of the conspecifics.

It eats the various vitamins-enriched live brine shrimp as well as live black worms. They also prey on small crustaceans that live in live rock and sand.

Are you searching for the perfect food for your Dragonettes? We suggest the AlgaGen Tisbe biminiensis.

The body and head of the Red Mandarin Dragonet is a maze of orange, blue and red. Males can be distinguished from females due to their longer dorsal spines. Contrary to the green mandarin this red mandarin has bigger and more prominent stripes in red and pink pectoral fins. It is best maintained in an aquarium that contains plenty of live rock, live sand, and hiding spots. It can be moderately hardy in mature reef aquariums, provided it is given special attention. It’s not aggressive with other fish, excluding species that are similar to it.