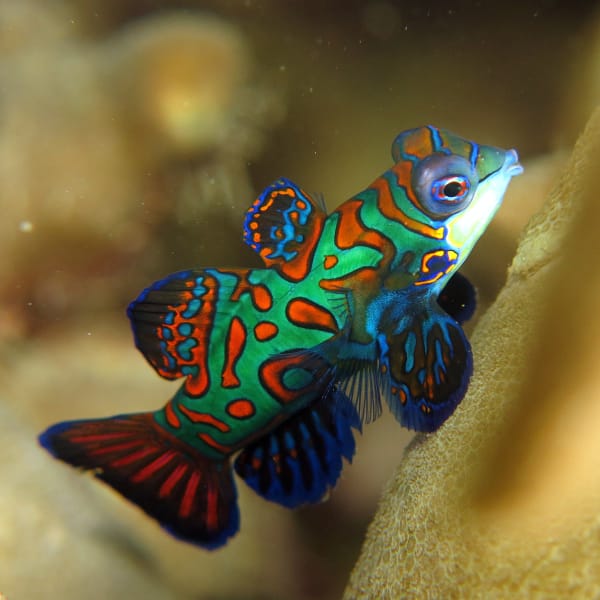 The ORA® Captive-Bred red Dragonet (dragonet synchiropus) is also known as the Starry Dragonet or Stellate Dragonet. Its body is a tangle of white and red, with dark spots that are large or patches. The male typically has more vibrant colors and a larger dorsal fin.

It is best to have an established reef aquarium that is 30 gallons or more with plenty of live rocks to hide and graze upon. The substrate must be live sand and the tank must be populated by gentle fish. A variety of species can be kept and it is recommended to introduce them all into the aquarium at the same time. The ratio is 2 to three females for every male. A 55-gallon or larger aquarium is required when more than one male will be kept. Males are likely to have a longer dorsal ray or mast on their dorsal fin, which is also adorned with distinct stripes and eyespots, or ocelli. Female Dragonets have a smaller, more rounded dorsal fin. Keep only one male in each aquarium as two males are likely to fight to the death.

The diet of the marine fish should comprise bloodworms, brine shrimp, and tiny invertebrates. They are slow-moving and conscious feeders and shouldn’t need to compete for food sources.

We suggest AlgaGen Tisbe biminiensis for wild-caught Dragonets. However captive-bred Dragonets will also appreciate them!

The Red Scooter Dragon’s body is a smattering of white and red with large dark spots. Males usually have more vibrant colors and a bigger dorsal fin. It is attracted to a reef aquarium with plenty of live rock to hide and graze upon. The substrate must be live sand, and the tank should include docile fish. There are more than one species that could be kept and it is recommended to introduce all of them to the tank at once. The ratio should be between 2 and 3 females for each male.