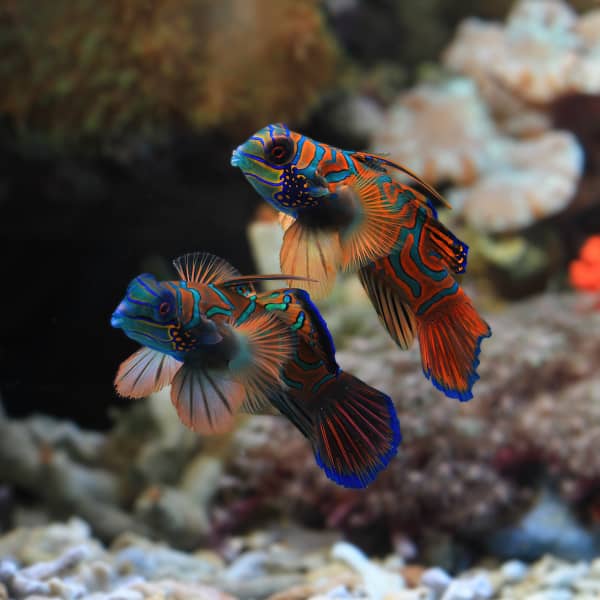 The ORA® Captive-Bred Spotted Mandarin also known as the Spotted Mandarinfish, Psychedelic Mandarinfish, Psychedelic Fish, or Picture Dragonet, was first discovered within the Western Pacific Ocean in 1976 by Peters. The fins, head, and body have a psychedelic mix of orange, blue and black spots that are set on a green base. Males can be distinguished from females due to their longer first dorsal spine. Keep only one male in each aquarium as two males could be fight.

It needs a 30 gallon or larger aquarium that has a live substrate as well as lots of hiding spots. It can be moderately tough in reef aquariums, provided it is given the proper attention. It’s not particularly antagonistic to other fish other than the conspecifics.

ORA has been the pioneer company to introduce significant amounts of captive-bred Mandarin Dragonets, also known as Mandarin Gobies, to the commercial aquarium market. The vibrant patterns and colors of the Mandarin are what makes them among the most sought-after and popular marine aquarium fishes on the market. However, wild-caught species have been criticized for being difficult to feed or keep. These concerns have been addressed because ORA Mandarins have been fed with a variety of meals. All levels of hobbyists can now take pleasure in these simple to keep Mandarin Dragonets due to ORA’s research efforts and manufacturing capabilities. ORA.

ORAs captive-bred Mandarins take a variety of dry and frozen foods after getting used to their tank. They can be provided with Nutramar Ova, finely chopped Hikari Frozen Blood Worms, fish roe frozen or live brine shrimps, daphnia frozen along with New Life SPECTRUM Small Fish Formula pellets. A few have expressed an interest in Cyclopeeze. But, when it comes to the tank of a reef they will often prefer the live copepods naturally found that are found in live rock. Additionally, AlgaGen Tisbe Biminiensis.

Synchiropus picturatus can be described as a tranquil fish that thrives in a reef tank that is established in the absence of aggressive tank mates who may challenge each other for food.

The Spotted Mandarin head, fins, and body is a bizarre mix of orange, blue, and black spots on a white base. Males can be different from females because of their longer dorsal spine. It needs an aquarium with an active substrate and many hiding places. It is moderately robust in reef aquariums when provided with special attention. It’s not particularly aggressive toward other fish, with the exception of the conspecifics. The Spotted Mandarin has been known to reproduce successfully in aquariums.