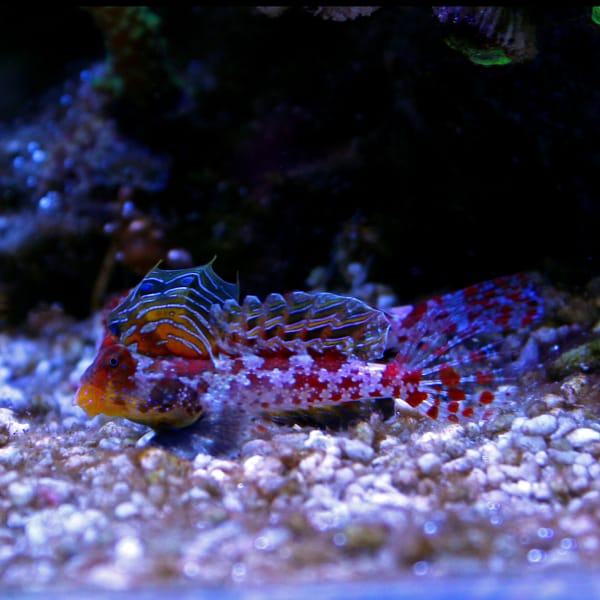 Blue Mandarins that are captive-bred possess a distinct advantage over the wild harvested species. They are stronger and more at ease with conditions in home aquariums. This makes them an excellent choice for beginners as well as experienced aquarists.

ORA Captive-Bred Blue Mandarins sometimes referred to as Mandarin Dragonettes or Mandarin Gobies is a stunning fish sought-after by aquarists for their stunning beauty. Blue Mandarins are a vibrant visual display of gorgeous jewel-tone colors like amber orange, cobalt blue, and emerald green, with a maze-like pattern. Their playful movements and quirky personality add to their appeal, providing endless hours of entertainment.

Blue Mandarins are best placed in a 30 gallon or larger aquarium that has live rocks, live sand, and plenty of hiding spots. They can be moderately tough in reef aquariums, provided they are given the best attention. They aren’t overly hostile towards other fish, other than species that are similar to them. Male Blue Mandarin is easily distinguished from the female Blue Mandarin by its distinctive, elongated, first dorsal spine.

ORAs captive-bred Mandarins accept a range of prepared dried and frozen food items upon getting used to their tank. They could be served Nutramar, ova finely chopped hikari, Frozen Blood Worms, fish roe frozen, live brine shrimps, daphnia frozen and New Life SPECTRUM Small Fish Formula pellets. A few have shown an enthusiasm for Cyclopeeze. In the wild Blue Mandarins are micropredators that actively hunt amphipods and copepods. They should be supplemented by live food. Also, we recommend the algae Gen Tisbe Biminiensis.

Synchiropus magnificentus can be described as a tranquil fish that thrives in a reef tank that is already established as long as there aren’t any aggressive tank mates that could be competing with each other for food.

Mandarin gobies are among the most unusual fish that you could ever ask for. The Blue Mandarin comes in a wide range of colors, including blue, red, orange and purple. They’re most comfortable with 30 gallon or bigger aquarium that has live sand and many hiding spots. They’re a fantastic option for reef tanks and are also a great companion to seahorses!

Their diet should include an assortment of live and frozen brine shrimp as well as live black worms.