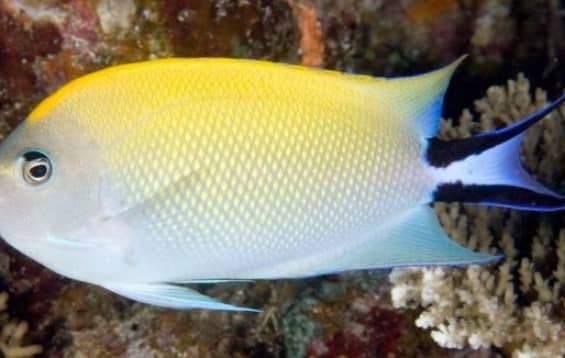 The female is yellow ventrally and dorsally. The caudal fin, which is marine blue highlighted, has a dark blue-black edge on the top and bottom. The entire body of the male is marked by a series of vertical red stripes. The male’s tail is yellow and has blue edges.

An environment that allows the fish to flourish is a minimum of 125 gallon tanks or more. The Blackspot Angelfish is a rare exception among angelfish. It is a good reef dweller and will be able to live on reefs and not attack soft and stony corals (sessile invertebrates). The Blackspot Angelfish is more peaceful than most angelfish and can be kept in a mated couple or school. The only zooplanktivores of angelfish are fish from the genus Genicanthus.

With a very flared tail, this Spotbreast Angelfish is one of the few angelfish to display striking sexual dimorphism. Females are yellow in the dorsal area and the ventrally area is light blue. The caudal fin is blue-marine highlighted by a dark blue-black edge at the top and bottom. Males are marked by a series of vertical red stripes that cover the entire body in pale colors. The male’s tail is forked and is bright blue and yellow. A large tank with plenty of hiding spots and live rock to graze on can provide a habitat where it can flourish. A distinct exception to the majority of angelfish that are common is the Blackspot Angelfish will make an excellent reef dweller and won’t nip at soft corals and stony ones (sessile invertebrates). It’s also more tranquil and can be kept as a pair or in schools. Fish from the Genus Genicanthus are the sole Zooplanktivores in the angelfish.

Origin of the Spotbreast Angelfish

The species of angelfish can be located in the Indo-Malayan area up to the southwestern Pacific Ocean and from the Ryukyu Islands to New Caledonia and Fiji.