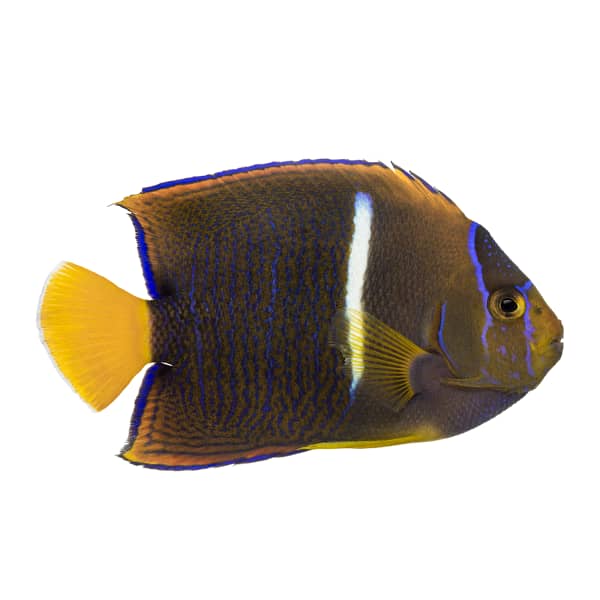 The Passer Angelfish is also called the King Angelfish. The adult is primarily dark blue, with the vertical stripe of white that runs to the dorsal end approximately two-thirds of the way up to the fin in pelvis. The dorsal fin has a rim of yellow. The pectoral and caudal fins also have yellow fins, and the ventral fins are yellow for females and white for males. A juvenile’s color is orange and has the white fin and blue stripes. It is believed that the Passer Angelfish can grow to more than a foot long, therefore it needs at least 250 gallon of aquarium. It is a tough fish, but it can turn aggressive, which is why it should be kept in a tank with semi-aggressive tankmates. It feeds on live rocks and can attack stony and soft corals (sessile invertebrates) and clam mantles which is why it’s not the best choice for the reef aquarium.

The diet of Passer Angelfish should consist of vegetables, like Spirulina as well as marine algae, meaty foods, and premium angelfish dishes that include sponges. Feeding should be at least three times a day.

Small Juvenile include the coloration of the juvenile, the Small-Medium colored to be a young adult The medium will have a subadult while the large will have Adult coloration.

General information regarding Passer Angelfish
The adult is mostly dark blue and has an elongated white vertical stripe that extends downwards from the dorsal fin approximately two-thirds of the way towards the pelvic fin. The dorsal fin is rimmed with yellow. The pectoral and caudal fins also have yellow fins, while the ventral fins appear yellow on females and white for males. The juvenile is orange, with only one white and several blue stripes. This Passer Angelfish can grow to more than a foot long therefore it needs a huge aquarium. It is a robust fish, however it can be aggressive, which is why it should be kept in a tank with tank mates who are semi-aggressive. It feeds on live rock and may be aggressive towards soft and stony corals (sessile invertebrates) as well as clam mantles which is why it’s not a suitable choice for an aquarium with a reef. A Small Juvenile aquarium will include the Juvenile colors, the Small-Medium color will be changing towards an adult in the midst, medium will have a subadult and the Large with Adult coloration.

Passer Angelfish Diet & Nutrition
Passer angelfish is a species of fish. Passer angelfish can be described as an alligator that feeds primarily on filamentous algae, as well as external parasites that are found in other fish during their juvenile stages. As adults, they may eat invertebrate eggs and cnidarians as well as parasites and zooplanktons, but mostly on algae and sponges.
For the tank it’s recommended to have plenty of rocks for your Passer angelfish to feed on, especially for juveniles who feed predominantly on algae. Adults are fed diverse diets that include sponge material as well as Spirulina. They also enjoy Nori fresh, dehydrated broccoli, as well as some meaty foods like Mysis and brine shrimp.

Passer Angelfish Origin
Holocanthus passer is widely distributed throughout The Eastern Pacific which ranges from the Gulf of California to Peru including the Galapagos Island.