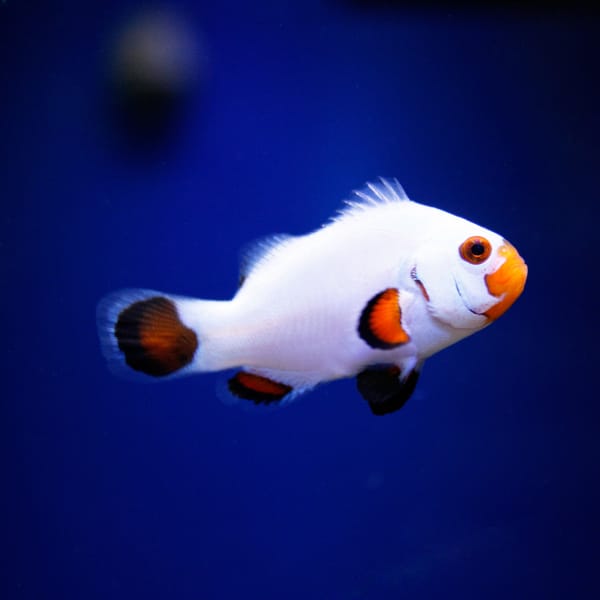 This Captive-Bred Wyoming White Clownfish is easily bred in your aquarium at home. Females are the most massive of the two as the pair generally stay close to each to each other in the aquarium. This Captive-Bred Wyoming Clownfish is an egg-laying fish and will lay eggs onto a smooth surface . They also protect the eggs from tankmates. The eggs are usually born within 6 to 11 days, based on the temperature of the water. The fry should be kept in a separate tank with a diet consisting of rotifers they are then followed by baby brine shrimp.

This captive bred Wyoming Clownfish is a very shrewd eater. It can eat most meaty food items and frozen herbivore dishes.

The Wyoming White Clowns are a variation of the standard Ocellaris Clown, which has dark orange fins that change into black with time. They are likely to select an anemone as their host very quickly (just keep away from condylactis). In one of the most fascinating demonstrations of symbiotic interaction that you can observe in your aquarium at home the clownfish provides food and cleaning services to the anemone. This helps protect the clownfish. The clownfish is safe for reefs and will eat processed food and is able to be added to small groups. Clownfish have been known to alter their sexes to increase the chance for reproduction as well as genetic variety in wild. In the event that a female is killed, the male will switch their sex to replace her. The Wyoming White Clowns have orange faces, which are highlighted by black. Their bodies are primarily white, and a lot have black spots on their gill covers. They are called the Frost Bite Clown will grow to approximately 4″.