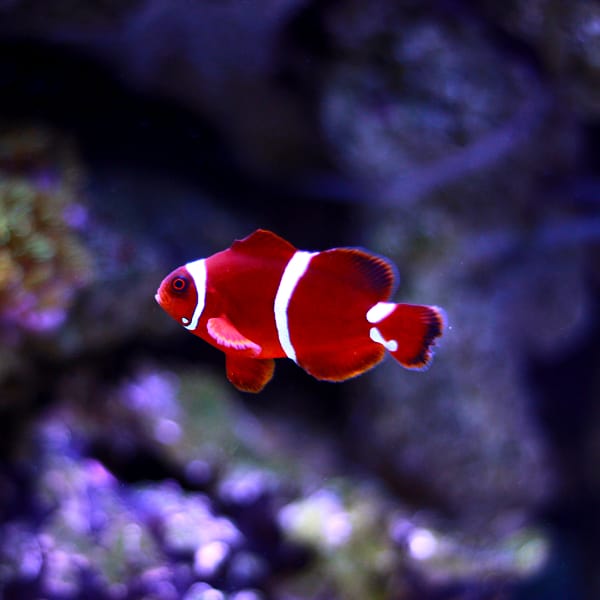 The Captive-Bred Premium Goldflake Maroon from ORA® is an intriguing variant from the Gold Stripe Maroon Clownfish. Commonly, individuals have stripe extensions or spots, while premium fish will have large areas on their bodies covered. Premium Goldflakes are extremely rare and the availability of these stunning clownfish is extremely scarce. As with the majority of Gold Stripe Maroons These fish begin with white-colored stripes. They become gold when they get older with the first signs showing at around 12-18 months old. Since they’re shipped at around 8-10 months old the hobbyists will be able to experience the gorgeous transition period of turning white to gold.

Captive-bred fish are extremely hardy and long-lasting fish. They are an ideal choice for beginners or experienced aquarists. This Premium Goldflake Maroon Clownfish is the ideal choice for the reef aquarium. All varieties of Maroon Clownfish are the most territorial of all species of clownfish. Premium Goldflake Maroon clownfish are extremely sensitive to elevated levels of copper and should not have exposure to copper levels that are close to or over .15.

Clownfish that are captive-bred are easy to breed in an aquarium in your home. Females are usually the most massive of the two, and two fish usually remain close to one another inside the aquarium. The fish are egg-layers and lay eggs on flat surfaces, and protect the eggs from tankmates. The eggs are usually born between 8 and 11 days, depending upon the temperatures. The fry need to be raised in a separate tank with a diet consisting of baby brine shrimp and rotifers.

Do not drag this Premium Goldflake Maroon Clownfish with a net because the cheek spines of the fish will get stuck. Make use of a specimen container to capture the fish if it is required.

The designer clownfish don’t require an Anemone to live however, they will take different Anemones as hosts and even corals. Their preferred Anemones to stay with include those of the carpet Anemones Stichodactyla Gigantea as well as the magnificent Anemone Heteractis Magnifica.

Clownfish possess a distinct swimming pattern that differs from other fish. This could be passed on by their genetic makeup resulting from years of wiggling in the tentacles that belong to Anemones. When the Clownfish moves within its tentacles that sting, the Anemone’s mucus will likely be splattered across the body of the Clownfish that helps to shield it from further stabbing.

In the wild, they live in small groups, with one dominant female of a large size and a smaller, actively sexually active male as well as a couple of males and the young. When the female is gone, the largest male will change sex and become the dominant female, with the remaining Clowns climbing the ladder in front of it.