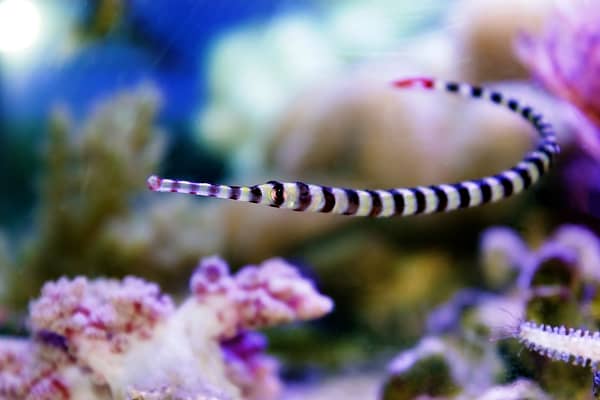 The Banded Pipefish is a type of reef pipefish, also known as flagtail pipefish. The fish is a better swimmer than its seahorse counterparts and seldom comes into close contact with the substrate. In the wild, it is common for the Banded Pipefish to be found in the sand under rocky overhangs or corals, and near the bottom of the reef habitat.

The Banded Pipefish has a long and slender body that has an incredibly small tubular mouth, and an oval tail that resembles a flag. The body is white, with dark red to black vertical bands that extend from the snout up to the tail. The tail is vibrant red, with white edges and dots in the middle.

Due to the consumption habits, we recommend that experts only buy these fish. It usually prefers eating only live copepods inside an older reef aquarium with lots of macroalgae and live rock. The ideal diet to begin this fish off with is Live Copepods and vitamin-rich live brine shrimp. But, live brine for babies shouldn’t constitute the majority of the diet. As time passes it is possible that the Banded Pipefish may become accustomed to eating frozen CYCLOP-EEZE as well as tiny Mysis as well as Nutramar Ova.

Are you searching for the perfect food for your Pipefish? We suggest the AlgaGen Tisbe biminiensis.

After a lengthy courtship dance after which the female will tie her eggs with adhesives to the flat portion beneath his trunk. The pair can be seen regularly mating in an aquarium if they are well-fed. It’s difficult to tell the gender, however mature males usually have a flat appearance because of the brood patch and females tend to be more round.

This species is best kept in groups or pairs of its own species in an aquarium of 50 gallons or greater. It is possible to keep it with smaller, timid fish like tiny seahorses, gobies, dragonets, and firefish. Agressive, territorial, or fast-moving fish don’t make ideal friends. Pipefish are harmed by corals that have tentacles that sting or can be large enough to consume them such as brain corals. Pipefish may also be injured by invertebrates like crabs as well as large shrimp.

Please note that we guarantee that ALL aquarium species we sell will arrive in good shape. However, due to the greater degree of maintenance required for this particular species, it was designated “Expert only.” This species is only recommended to the aquarist who is an expert or zoo institution. Expert-only aqua life is exempt from our guarantee for a period of time after their arrival.

The Banded Pipefish is a type of reef pipefish, also known as flagtail pipefish. This fish is a more powerful swimmer than seahorse relatives and seldom comes into contact with the substrate directly. In the wild, it is common to see it in the rocky areas of overhangs, corals, or in close proximity to the floor of its habitat on reefs. This Banded Pipefish has a long slim body, with an incredibly small tubular mouth and an oval tail that resembles a flag. The body is white, with dark red to black vertical rings running from the snout down to the tail. The tail is bright red, with white borders and dots in the middle. After a lavish courtship dance and a rousing dance, the female will fix her eggs with adhesives to the flat portion that is located on the bottom of the trunk of the male. Couples will often mate in mature reef aquariums if they are fed well. It’s difficult to tell the gender, however mature males usually appear flat due to the brood patches while females are more round. This species of social fish are best kept in pairs of mates or in groups of its own species in a large or medium-size tank. It is possible to keep it with shy, small fish like tiny seahorses, gobies, dragonets, and firefish. The aggressive, territorial, or swift-moving fish make ideal partners. Pipefish are harmed by corals and anemones with tentacles that sting or have enough size to devour brain corals. Pipefish may also be injured by invertebrates like large shrimp and crabs.