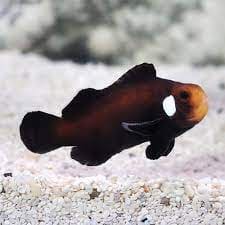 ORA® Captive-Bred Single Dot Domino Clownfish is a special and exclusive version that is a variant of the Ocellaris Clownfish originating from the Midnight Clownfish (a nearly black natural variation that has been discovered inside ORAs growth out system). Offspring from Midnight Clownfish typically range from entirely stripeless to distinctively designed Extreme Misbars. Sometimes ORA might discover Midnight Clownfish offspring with white dots. Thanks to the efforts by Julian Sprung, these fish were called Dominos. The white dot could be located on the cheek or any other part of the body. The ORA Single Dot Domino Clownfish, as the name suggests has a single dot.

This ORA Single Dot Domino Clownfish can be easily bred in your home aquarium. Females are the most massive of the two and both fish tend to be close in the tank. Clownfish lay eggs on flat surfaces and guard them against tankmates. The eggs are usually born within 8 to 11 days, based on the temperature of the water. The fry should be raised in separate aquariums eating a diet of rotifers then followed by baby brine shrimp.

The diet of a Domino Clownfish includes almost any meaty food item and herbivore-based preparations.

Offspring from Midnight Clownfish range from completely stripeless, to specifically designed Extreme Misbars. Sometimes, you’ll see Midnight Clownfish with dots (single dots in this particular species of fish). The distinct white marks can be located on the cheek or any other region on the body.