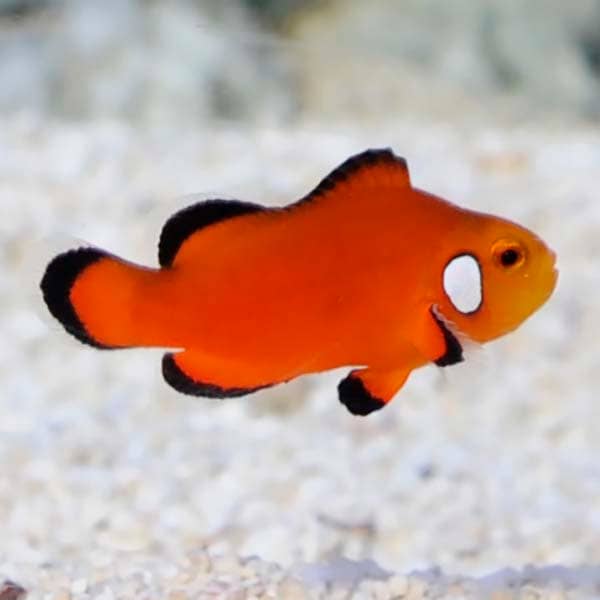 The ORA® Captive-Bred Naked With Dots Ocellaris Clownfish has a touch of modesty, with adorable cheek dots, where the head bar would normally be. These beautiful captive-bred clownfish do not only bring a unique aesthetic to your aquarium, but they additionally play a significant role in the preservation of the reef’s natural habitat.

Captive-bred clownfish possess distinct benefits over species that are harvested wild. First, captive-bred fish are extremely durable and at ease with conditions in home aquariums. This makes them the perfect choice for newbies and experienced aquarists alike. It can be kept in conjunction with many other species of Captive-bred clownfish in the event that they are introduced into the aquarium in the same way.

Captive-bred clownfish can be easily bred in your home aquarium. Females will be most massive of the pair, both fish generally stay close to each other in the aquarium. Captive-bred clownfish lay eggs and deposit them on flat surfaces and guard the eggs from their tankmates. The eggs are usually born within 6 to 11 days, based on the temperature of the water. The fry should be raised in separate aquariums eating Rotifers then followed by babies brine shrimp or Calunus.

Captive-bred clownfish are omnivores needing both meaty and non-meaty food along with greens as part of their diet. High-quality marine flake food, which is high in spirulina algae along with freeze-dried and frozen food items is widely accepted.

The Naked Clownfish With Dots is a very popular fish and will get along with other Clownfish in the same aquarium, depending on the size of the aquarium. It is also one of the first marine aquarium fish to be bred successfully in captivity. They do extremely well in the aquarium and are very peaceful.

This clownfish does not need an Anemone to survive, but will accept many different Anemones as its host, including corals. Their favorite Anemones to call home are the Carpet Anemones Stichodactyla Gigantea or the Magnificent Anemone Heteractis Magnifica.

These fish will accept most fish foods and are perfect for reef tanks. More than one can be kept in the same aquarium and they prefer to be kept in groups.

Clownfish have a very distinct swimming motion that is different from most fish. This is likely passed on through their genetic makeup from centuries of wiggling within the tentacles of Anemones. As the Clownfish wiggles within the stinging tentacles the Anemone’s mucus is likely smeared over the Clownfish’s body, which then protects it from additional stings.

In the wild they live in small groups with one large dominant female, one smaller sexually active male, and a handful of smaller males and juveniles. When the female is lost the largest male will then change sex and become the dominant female with the other Clowns moving up the ladder behind it.