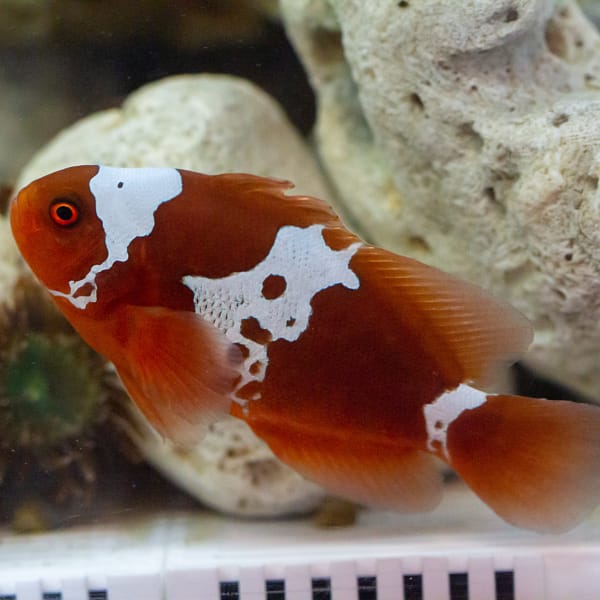 The ORA® Captive-Bred Lightning Maroon Clownfish are awe-inspiring with their unique Lightning bolt patterns that look like bolts No two individuals appear identical. As the fish age, their colors and patterns will get more intense, darken, and could alter.

These designer clownfish are renowned for their vibrant coloration and huge fins as well as for their confidence. A mature-sized Lightning Maroon with fully mature coloration can be a stunning centerpiece fish to have in any aquarium. When pairing the two species, it’s recommended to have striking differences in size between two species.

The captive-bred clownfish is a very tough and tough fish, making them an ideal choice for novice or veteran aquarists. This Lightning Maroon Clownfish is an excellent choice for an aquarium with a reef. In general Maroon clownfish are ones with the highest territoriality of clownfish species. Maroon Clownfish are extremely sensitive to levels of copper and should not be exposed to concentrations of copper that are near or above .15.

Clownfish that are captive-bred are easy to breed in a marine aquarium. Females will be the largest of the pair and two fish usually remain close to one another within the tank. The fish are egg layers and lay eggs on flat surfaces, and will protect the eggs from tankmates. The eggs usually hatch between 8 and 11 days, depending on the temp. The fry need to be raised in separate tanks eating baby brine shrimp and rotifers.

Do not drag or move this clownfish species with a net since its cheek spines may get caught. Make use of a specimen container if the capture is required.

Maroon Clownfish (Amphiprion biaculeatus) is among the most well-known and famous vreef aquarium fish. They always rank among the top 20 species of saltwater fish thanks to their amazing maroon-red coloration as well as the iconic gold or white stripes.