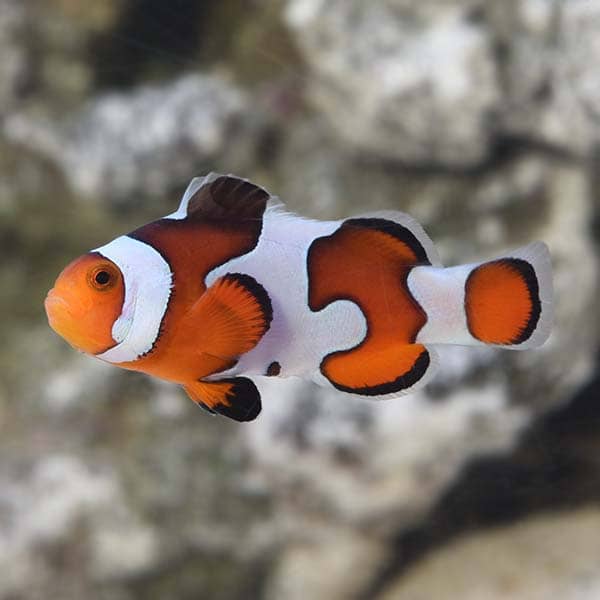 ORA® Oceans, Reefs and Aquariums Gladiator Clownfish, sometimes referred to as DaVinci as well as Fancy Clownfish, are beautiful colors that belong to this species of Ocellaris Clownfish discovered and named by the famous breeder Bill Addison. What differentiates this particular species from other Ocellaris Clownfish is the prominent white bands that curvatures and merges as brush strokes. In contrast to Snowflake Ocellaris Clownfish that demonstrate similar levels of white coloring, however, in a random and disorganized pattern, The Gladiator Clownfish retains the orange coloration in sharp broad blocks that are perfectly traced by black stripes.

What is it that makes an ORA® Captive-Bred Gladiator Clownfish even more attractive to aquarists is it is caught and bred to help safeguard the fragile reef ecosystems of the world.

The Captive-Bred Ocellaris clownfish can be kept in conjunction together with other clownfish that are captive-bred, when they are brought into the aquarium in the same way.

The Captive-Bred Ocellaris Clownfish is also very easy to breed in your aquarium at home. Females are the biggest of the pair, The two species generally stay close to each to each other in the aquarium. The Ocellaris clownfish, Captive-Bred, is an egg-laying fish and will lay eggs in a level area and protect them from tankmates. The eggs are usually born within 6-11 days, depending on the temperature of the water. The fry should be kept in separate tanks eating rotifers and then baby brine shrimp.

The ORA gladiator is a ferocious eater. It can eat most meaty food items and frozen herbivore dishes.

The Gladiator Ocellaris Clownfish has elegant flowing lines and curves that are accentuated by an orange-colored body. The pattern could or might not be symmetrical on both sides, and the markings may differ.

This Gladiator Ocellaris is a very well-known fish that can be found together with other Clownfish inside a tank, according to how big the tank is. It was also among the very first marine aquarium fish to successfully breed in the wild. They thrive in aquariums and are very tranquil.

The clownfish doesn’t require an Anemone to live but can accept a variety of Anemones as hosts and even corals. Their preferred Anemones to stay with are carpet Anemones Stichodactyla Gigantea as well as the magnificent Anemone Heteractis Magnifica.

They are tolerant of the majority of fish food and are ideal for aquariums with reef tanks. It is possible to keep multiple in one tank and they are best kept in groups.

Clownfish possess a distinct swimming pattern that differs from the majority of fish. It is probably passed down by their genetic makeup resulting from years of wiggling in their Anemones. While the Clownfish moves within its tentacles that sting, the Anemone’s mucus may be spread over the body of the Clownfish and helps to shield it from further stabbing.

In the wild, they live in small groups that include one dominant female that is large and a smaller,  active male as well as a couple of males and young ones. When the female is gone, the male with the biggest size will change sex and become the dominant female.