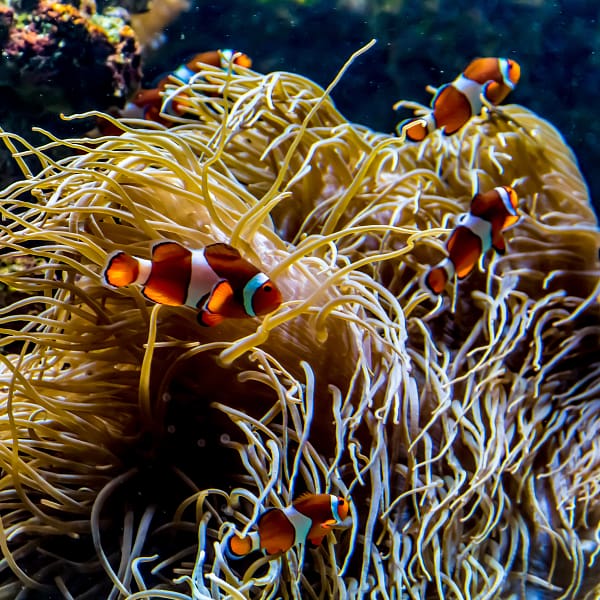 ORA® Captive-Bred Blood Orange Clownfish is an intergeneric hybrid that exhibits positive traits from both species of the parent. This brightly colored fish was the result of crossing female Maroon Clownfish (Premnas biaculeatus) with male Ocellaris Clownfish (Amphiprion Ocellaris).

The ORA® Captive-Bred blood orange clownfish has a finnage similar to the Maroon Clownfish and thick barring highlighted with dark black of the Ocellaris Clownfish. This results in an extremely striking specimen that has big flowing fins and a vibrant, crisp red coloring. This ORA Captive-Bred blood orange clownfish is an excellent addition to nearly any saltwater aquarium. ORA recommends selecting tankmates cautiously due to the personality of this species being quite different. ORA Captive-Bred Blood Orange Clownfish is a bit in the middle among the Ocellaris in comparison to those of the Goldstripe Maroon.

The captive-bred fish have a unique advantage over the wild caught species because they’re generally resilient and more accustomed to conditions that are typical of the aquarium at home. So, captive-bred fishes are the perfect choice for newbies and experienced aquarists alike.

This Blood Orange Clownfish is simple to breed in a home aquarium. Females are the biggest of the pair, The two species typically stay close to one within the aquarium. Clownfish are egg-laying fish and deposit eggs on flat surfaces and guard the eggs against other tankmates. The eggs are usually born between 8 and 11 days, depending on the temperature of the water. The fry need to be raised in separate aquariums eating a diet of rotifers, followed by babies brine shrimp and Calunus.

The clownfish don’t require an Anemone to live, however, they can accept a variety of Anemones as hosts such as corals. Their preferred Anemones are those of the carpet Anemones Stichodactyla Gigantea as well as the magnificent Anemone Heteractis Magnifica.

Clownfish have a distinctive swimming style that differs from other fish. It’s likely that this is passed on by their genetic makeup resulting from years of wiggling in their Anemones tentacles. While the Clownfish moves within its tentacles of Anemones, the stinging mucus may be spread over the body of the Clownfish and helps to shield it from further injuries.