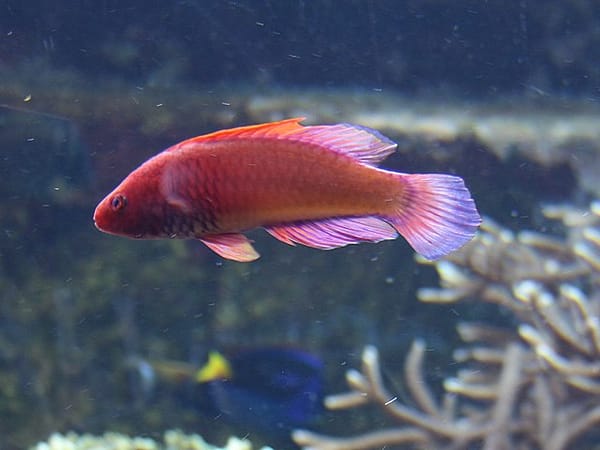 The Lunate Fairy Wrasse an extremely peaceful fish that will be a stunning addition in your tank. Males of adulthood are more bright and flashier than female counterparts.

The Lunate Fairy Worasse will be a great addition to an aquarium that is fish-only or a reef that is 50 gallons or more. It requires a shaded space far from glowing lights. They won’t bother corals or other invertebrates, which makes them the perfect fish to be kept in the reef aquarium. They are known to leap, which is why it is recommended to have a sturdy canopy or tight fitting lid.

Fairy Wrasses (Cirrhilabrus sp.) and Flasher Wrasses ( Paracheilinus sp.) have a generally peaceful temperament and are tolerant of the majority of tankmates, as long as there is plenty of space for escape and a safe place for safety. The Flasher Wrasses are more energetic and outgoing as compared to Fairy Wrasses and both groups could be aggressive to one another. Males in both groups are generally more vibrant than females and juveniles, and males display their color and behavior to their best advantage when even in front of females. Variations in the region and cross-breeding within the two groups may make it difficult to identify.

Fairy and Flasher Wrasses are typically found in rubble piles and rocks and ought to have plenty to hide in. They are ideal fish for aquariums with reefs. They will not harm corals, polyps, or any of the invertebrates however they shouldn’t be kept in a tank with tiny crustaceans such as shrimp. These fish are known as jumpers and therefore the tank must be protected at all times.

Diet of Lunate Fairy Wrasse
They will generally eat all kinds of small food after they have adapted. They should be provided with a diverse diet consisting of frozen and flakes, as well as fresh food such as copepods Cyclops brine shrimp Mysis shrimp, and similar foods.