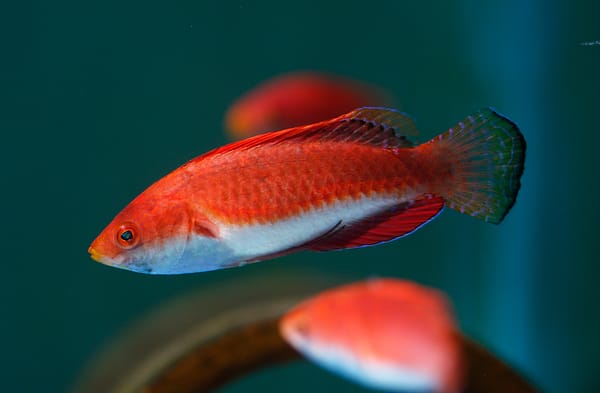 The Blue Throat Fairy Wrasse is a native of Indonesia and the Philippines and is found in the rubble habitats of the reefs’ outer edges . This wrasse with a peaceful appearance is an excellent addition to every Reef Aquarium adding stunning coloration. Similar to other wrasses males in courtship display greater intensity in their color. The colors can vary based on the mood of the fish.

The Blue Throat Wrasse is a tranquil active fish that will add color and energy to a reef or fish-only aquarium that is 90 gallons or greater. They are not a nuisance to corals or invertebrates, making them the ideal fish to keep in the reef aquarium. A single male is kept in a group with females, which are introduced before or in the same manner as the male. They are known to jump, therefore an appropriate canopy that is tight fitting is suggested.

It is recommended that the Blue Throat Fairy Wrasse diet must consist of vitamin-enriched frozen mysis shrimps, vitamin-enriched brine shrimp frozen in brine, and other meaty food items, along with an excellent seafood flake, and marine pellets. Wrasses can be very active and require feeding often throughout the day.

Approximate size of purchase 2″ to 4″

Cirrhilabrus Cynogularis is the formal title for a “new” species of fairy wrasse, which has been a popular fish in aquariums for a long time. It shares some characteristics with common species, like Tonozuka’s wrasse and the redfin wrasse, the blue-throated fairy wrasse finally has an official name. The name itself suggests that males in Cirrhilabrus Cynogularis have a massive blue patch over the “throat” below the eye, gills, and the belly, which extends on the sides, all the way into the pectoral fins. Males in C. rubripinnis have also a blue patch on the throat, however it’s much smaller and less visible than C. cyanogularis.