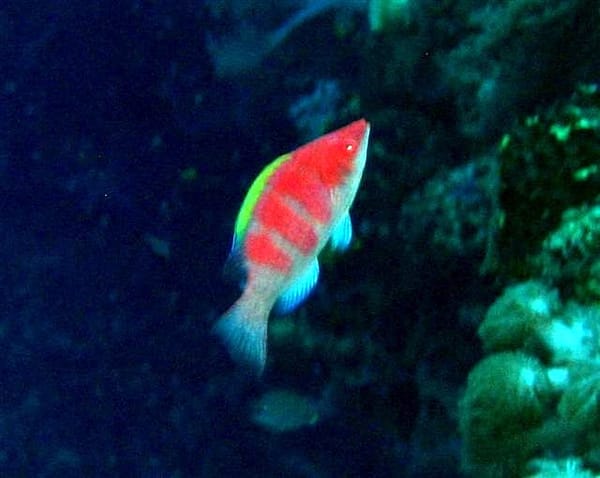 Scott’s Fairy Wrasse also called the Black-fin as well as the Blackedge Fairy Wrasse, originates from the waters of Australia, Cook Islands, and Fiji The location of each is a different color of Cirrhilabrus Scottorum.

The Scott’s Fairy Wrasse from Fiji is often referred to by the name Scott’s Greenback Fairy Wrasse and is predominantly green, with an enticing black border of the fin’s dorsal. Scott’s Fairy Wrasse originating from the Cook Islands is bluer in its color with fins that are yellow and has more distinct breaks in the hues. The species that are collected from Australia have more red fins, and the change in body color isn’t as significant. Females and males in this particular species appear alike colored, however, when they’re courting, males exhibit a greater intensity of color. Colors can differ based on the mood of the fish.

The Scott’s Fairy Wrasse is an extremely peaceful active fish that can provide both activity and color to a reef or fish-only aquarium that is 90 gallons or more. They are not a nuisance to corals or invertebrates, making them the ideal fish for reef aquariums. They are known to jump, therefore they require a sturdy canopy.

Scott’s Fairy Wrasse originates from the waters of Australia, Cook Islands, and Fiji Each location has a distinct coloration from Cirrhilabrus scottorum. This is Scott’s Fairy Wrasse from Fiji and is predominantly green, featuring a striking black border at the fin’s dorsal. Scott’s Fairy Wrasse originating from the Cook Islands is bluer in the color, with yellow fins, and has more distinct breaks between the different colors. The variety that comes from Australia has redder fins, and the change in the body’s color is not as significant. Males and females members of the species are alike in color, but when they are courting, males are more intense in color. Colors can change based on the mood of the fish. This Scott’s Fairy Wrasse is an extremely peaceful active fish that can add color and energy to fish-only or reef aquariums. They won’t bother any corals or invertebrates, making them the perfect fish for reef aquariums. These wrasses love to leap, which is why a tight fitting lid is advised.