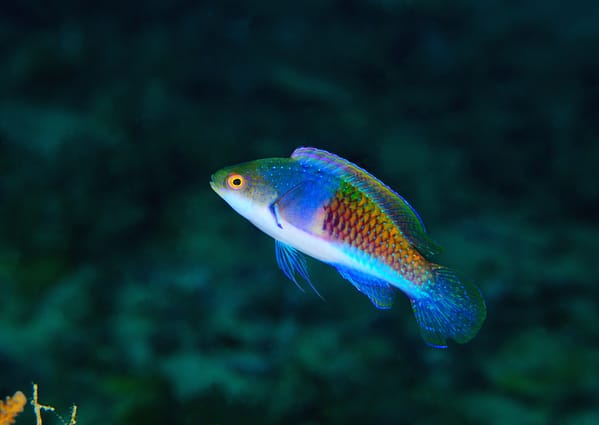 Bluehead Wrasse is sometimes referred to in the form of the Blue Scaled Wrasse as well as the Yellow Flanked Wrasse or Purplehead Parrot Wrasse also known as Blue Sided Fairy Wrasse. The color of this species can vary greatly, that ranges from blue and red coloration up to deep maroon or deep blue hue. Most often, this species has an underside that is pale. The Bluehead Wrasse and The Yellow Flanked Wrasse Cirrhilabrus Lyukyuensis have both been mistaken for one another for some time within the field of Ichthyology. Hiroyuki Tanaka, an eminent expert in the field of Cirrhilabrus spp, seems to believe that the two fish are identical to one another and only differ in color depending on the specific location they are in. Cirrhilabrus lyukyuensis typically features a distinct yellow-to- orange patch on the back of the pectoral fins. Be prepared for variations in color for these fish as the pattern and intensity of the color could also change depending on the area of their habitat, their age and even their mood.

The Bluehead Wrasse is a great fish to be used in the reef aquarium, giving bright color and energy to these aquariums. Wrasse belonging to the Genus Cirrhilabrus can be a great match when they are added simultaneously into the tank. They are among the top group of fish that can be found in the reef tank.

Bluehead Fairy Wrasse differs in its coloration, from a blue and red coloration to deep maroon as well as a dark blue coloring. Most often, the species will have the appearance of a light underside. This wrasse is an ideal fish to be used in the reef aquarium, giving a splash of color and a lively species to the aquarium. Wrasse from the Genus Cirrhilabrus can be a great match when they are brought together into the tank. They are among the top group of fish that can be found in reef tank settings.