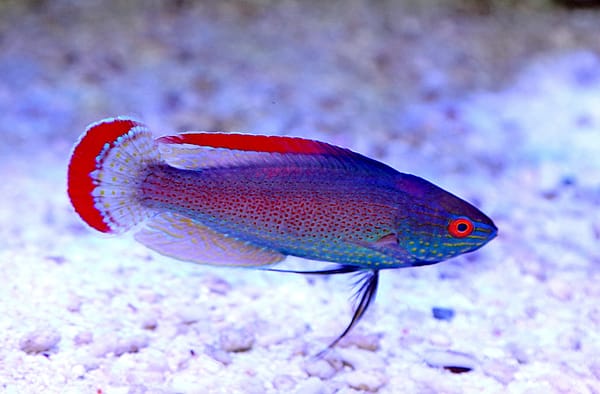 The pink Margin Fairy originates from the waters of the southern part of Japan to Indonesia and can be found in small numbers on the reef. It is a Pink Margin Wrasse is a vivid fish, sporting a range of colors, including the red border on the tail and dorsal fin. Males in this particular species are brighter colored compared to the female and juvenile, and, when courting, display more intensity of color. Colors can differ based on the mood of the fish.

The pink Margin Wrasse is an extremely calm, active fish that brings color and energy to a reef or fish-only aquarium that is 90 gallons or more. They won’t bother any corals or other invertebrates which makes them the perfect fish for reef aquariums. These wrasses love to leap, which is why a sturdy canopy is advised.

The Pink Margin Fairy Wrasse (Cirrhilabrus rubrimarginatus) comes from the waters of Southern Japan to Indonesia and is found in small groups along the reef. A Pink Margin Wrasse is a vivid fish that displays a variety of colors, including the red margins on the tail as well as the dorsal fin. Males from this kind of fish are brighter colored compared to the female and juvenile, and when in courtship, will show more intensity of color. The colors can vary based on the mood of the fish. This Pink Margin Wrasse is an extremely peaceful and active fish that brings color and energy to fish-only or reef aquariums. They are not a nuisance to corals or invertebrates, making them the perfect fish for reef aquariums. They love to leap, which is why a tight fitting canopy is advised.